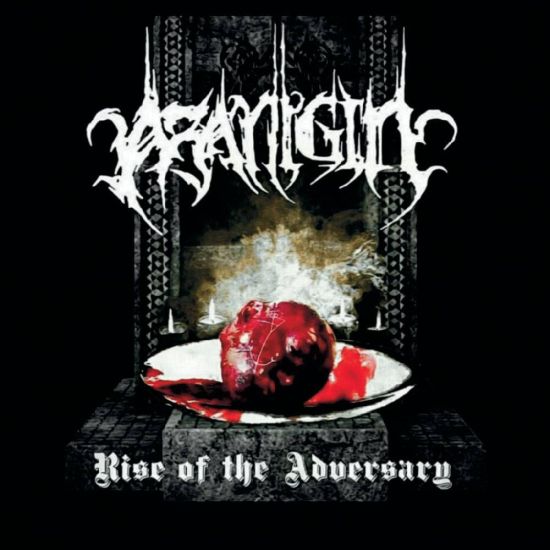 When there is no more room in the depths of hell, Azanigin walks the earth! What a hell of an album we have here folks, really impressive, relentless and menacing band from the US. Rise Of The Adversary was released last year in an independent effort to revive the North American black metal scene. Bands like Judas Iscariot (showcasing a more European approach to black metal), Inquisition, Von and Profanatica were pioneers in the US black metal scene but seemed to dim with the years and even disappeared from the radar. But a new breed of demonic creatures from the underground are claiming their throne and Azanigin is one of them.

Hellfire worshipers and necromancers can rejoice with this record. The hellish atmosphere is backed up with relentless hammers behind the kit, constant attack of the guitars and infernal shrieks that resemble a cat being strangled (and I mean it in a good way). The production that Azanigin presents here is very archaic yet understandable one; it is not caveman black metal (no, it is not a Transylvanian Hunger clone) but still you can enjoy a profound nihilistic and misanthropic feeling in some guitar passages. Almost as if it is existentially introspective, giving you hypnotic, melancholic and dark melodic moments followed by blast beats that will rip your head off. You can evidence the previous description in songs like ‘Life of Eternal Pain’, ‘Our Final Moments’ and ‘Aeonic Transmissions’.
I think that the Rise Of The Adversary is a way to avoid saying “the rise of Satan”. It is a wise move to focus on a more necromantic/occult approach rather than going for the obvious clichés that most black metal bands adore. Refreshing the flame of black metal seemed to be one of the goals of Azanigin without falling into plagiarism and with a more original/trademark sound. For instance, tracks like ‘Agia H Azanigin’ and ‘Esoteric Implantations’ demonstrate a clear intention to create their own stuff yet taking influences from here and there. In other words, this band sounds authentic in concept and execution wise, you really feel the anger and wrath in each track.

Overproduced bands that only want to be a copycat of glorious legends are on their way to extinction. Underground acts like Azanigin are rising from the depths to claim their own spot in the scene with hard work and authenticity. Most of the record Rise Of The Adversary is riff oriented and driven by mixed feelings like melancholy, introspection, wrath, anger and misanthropy in a way that you drown in a sea of blasphemous brutality. The raw production also works in favor of the band’s musicianship and concept. I hope to hear a second full length in the future from Azanigin. Final words, go and support the underground!