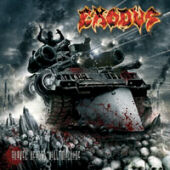 Shovel Headed Kill Machine was the first album with Rob Dukes and, worse still, Zetro Souza was not the only guy who had left the band. Tom Hunting and Rick Hunolt, forty percent of the godlike line-up of Bonded By Blood, were no longer part of the institution, too. The general overhaul of Exodus' appearance was not without consequences. Dukes made full use of his aggressive voice while adding a brutalising touch to the sound of the band. It quickly became apparent that he had not the intention to be a copycat of his predecessor. Unfortunately, his act of emancipation did not result in an outstanding vocal performance. While Zetro had always played the role of a poisonous dwarf, Dukes appeared as the violent asshole next door. Never charismatic or flexible, he spat out the words in a more or less monotonous manner. Okay, this unformed mass without neck did not ruin the whole record, but it remained a mystery to me why exactly Dukes had been chosen for the job vacancy. Band leader Holt should scrutinise his recruitment process.

From today's perspective, the album belongs to the less prominent outputs of the thrash legend. This is only logical when taking a look at its song material. Gary Holt's creativity did not reach an outstanding level during the song-writing process. Of course, he is among the most talented composers of the thrash metal scene and it comes therefore as no surprise that Shovel Headed Kill Machine avoids throwaway tracks. But I must also notice the fact that there is only one song that has the power to make my blood boil. Based on a drilling riff, the torrid 'Raze' possesses an irresistible drive. Crowned with a concise chorus, this song is on a par with a great number of the band's early classics. Quite apart of its compositional class, the opener reveals another element of the album in a matter of seconds. The bass guitar is very well audible and it goes without saying that it contributes a very heavy element. The prominent role of the bass matches the antisocial shouting of Dukes and both components push the music of the formation to the next level of harshness and hostility. But was it desirable at all to sacrifice the previously dominating riffs for the sake of pure brutality? I don't think so.

Fortunately, the world is not only black or white. Holt's riffs are still a relevant factor, although they have lost some percent of their importance. The reason for this is easily explained. Each and every of the monolithic songs appears as a rock of granite with the effect that the entire work leaves not much room for technical subtleties. The new configuration of Exodus doesn't lack of energy, but its constant aggression endangers the dynamic of the compositions. For example, the heavyweight and mid-paced 'Shudder To Think' reminds me of a slowly rolling bulldozer. Some might say that it just represents the next part of 'The Toxic Waltz'. Fair position, these guys are not totally wrong. Anyway, it's a good and fairly catchy song, only dynamic components - I have mentioned it before - are conspicuous by their absence. That's the fundamental problem of the album, if one assumes that a 75% output can suffer from fundamental problems at all. While being not able to vary the level of brutality, Exodus do not realize that the vapid face of boredom shows up occasionally. No doubt, some songs leave a good impression (without making us forget the sharp-witted pieces of their first two albums). 'Karma's Messenger' kicks asses. It unites a memorable riff at the beginning with straight verses, before the memorably designed chorus and a strong instrumental part with great solos add the final polish. (Well, the 17 seconds between 3:09 and 3:26 seem to be adopted from Metallica's "Creeping Death", but that's no big deal.) The rapid title track also hits the mark, inter alia because of its compact configuration.

In contrast, the two overlong pieces must be branded as ambivalent, because their manageable substance does not justify the playing time. Further tracks do not meet my (high) expectations, but I am not alone in this. You will not find an Exodus fan whose most favourite song is 'Going Going Gone' or '44 Magnum Opus', even if the poor guy doesn't know any other track of the group. Speaking of their best songs, I must think of their debut. "Bang your head against the stage" - of course, you know that this programmatic line is taken from its title track. Astonishingly, the massively produced Shovel Headed Kill Machine prefers to bang the stage against your head while leaving the listener no possibility to control the vehemence of the collision. This is neither good or bad per se, nevertheless, one has to get used to the situation - and to the new line-up as well. Zetro come back, all is forgiven.