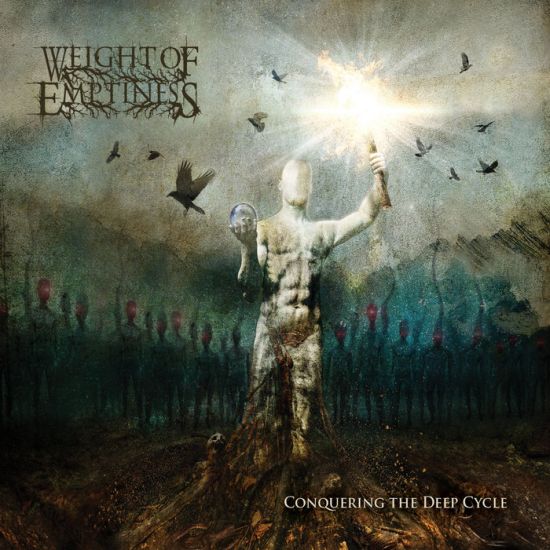 Monumental, monolithic and epic comeback of the Chilean almighty Weight of Emptiness. They return with Conquering the Deep Cycle a very solid, flawless and introspective release; full of progressions and moments of reflection to embrace the isolation of one's self.

Their previous effort Anfractuous Moments for Redemption was in my opinion a declaration of principles and vindication for the Latin American metal scene to the world. Serious musicians playing their instruments with passion and compromise, no intention to copy any specific sound but taking influences from here and there to create their own stuff.

What can we find in their new release? Well, I believe that this band gets better with time; they have reached a level of maturity that many bands dream to achieve. Conquering The Deep Cycle is a step forward towards evolution and progression of their songwriting and compositional standards. The album consists of an intro, outro and nine songs of pure talent in the form of progressive death/doom metal. The intro 'Conquering' is an atmospheric piece that sets the mood for what’s to come. Then, the album kicks with 'Invisible Mind Workers', a song with epic arrangements and dark choruses that ornaments the death metal attack with sumptuous elegance. Next track, 'Chucao' keeps up with the progressions between death, doom and bucolic atmospheres. Mixing raspy, deep guttural and clean (but masculine) vocals to create an epic sound which is the trademark of Weight of Emptiness. At this point, you already know what you're dealing with, an introspective trip towards the void of the human mind; there is no return! 'The Flame' of Prometheus has arrived and your only chance is to let yourself drown in the arpeggios and transitions from one sub-genre to the other. This track is my favorite because it changes gears and goes back and forth between the melancholy of doom metal and the aggression of death metal. The band made a very interesting video from this song so go and check it out.

So far, so good, keep going; you're just falling into the chasm of the emptiness. 'Lapse Of Insanity' starts with an acoustic intro that builds and elaborates an ominous mood that corrodes your soul. Spanish is Weight of Emptiness first language and they make it clear in the next tune called 'Lamentos' or “Laments” a song sung in their native language that fits the album like a glove. Next, we have 'Eleven Ravens' that begins as a slow, dragging song but all of a sudden gives you burst of violence in the form of death metal. We are almost at the end of this vortex and you are already purified from your human prejudices and worthless preconceptions. 'Drainers' and 'Lurking Hope' show off incredible instrumentation, the guitar players Alejandro and Juan really know their axes and how to make the strings cry. The last song 'Two Tears Alone' is a cover from the Chilean band Twilight Mist (the previous band of Alejandro Bravo (guitars) Juan Acevedo (guitars) and Alejandro Ruiz (vocals)). I believe it is a tribute to their own career into the Chilean metal scene. The outro echoes and connects with the intro in an endless loop, closing and conquering the deep cycle of human struggles and inner fights.

The artwork deserves a separate chapter in the book of front covers. Few pieces of visual art condense ideas as this one does. If you are careful and analyze the artwork you can find that the concept of the album is depicted right there: eleven ravens, the flame, invisible mind workers, drainers etc. Totally accord to their music, concept and aesthetics.

Conquering The Deep Cycle is a trip to human emotions and vindicates bands like Opeth and Anathema in the old glorious times. It is the hard work of a serious band with very vehement and capable musicians that display flawless executions and transmit very deep emotions. In conclusion, a remarkable effort with an incredible international projection that vindicates the Latin American underground metal scene. Cheers guys you really hit the nail with this record and set the bar high for your peers.