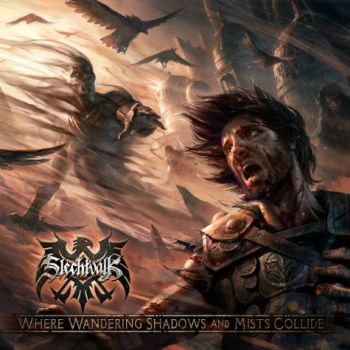 Slechtvalk are back. It took them six years to release a new album, among other things because their former record company broke down. A long hiatus is sometimes difficult, especially after such a glorious album like A Forlorn Throne. The crucial question is whether the band was able to preserve its level of aggression, energy and compositional brilliance.

As feared, Where Wandering Shadows and Mists Collide fails to endanger the status of the excellent predecessor, which seems to remain their "once in a lifetime" work. Okay, the formation did not modify the style of its compositions. On the one hand, this is positive, because the listener gets what he expects. On the other hand, this fact makes it easy to compare this effort with A Forlorn Throne and the result is less flattering for the here reviewed album. The compositions are just weaker than those of the predecessor.

Although the songs still offer a mix of majestic, brutal, melodic and fast-paced sections, the band has lost its success formula. Opulence and variety are still of high relevance, but some inadequate sections like the soft guitars in the middle of 'Asternas' ruin the entire piece up to a certain extent. Other tracks possess a better flow, but the magic that shimmered through the nine tracks of A Forlorn Throne is gone. Too many stylistic devices like the integration of heroic, more or less clean vocals parts fail. And another problematic aspect must be mentioned. While each and every track is neither insubstantial nor amateurishly designed, the entire work is not able to keep the listener under suspense. From my point of view, the comparatively great number of soft parts affects the overall impression. (The cautious sections of 'March to Ruin' constitute the positive exception) Additionally, the album lacks compactness and this is slightly irritating in view of the fact that I am speaking about a horde with four studio albums under its belly.

However, the Dutch dudes still offer a wide spectrum from emotional sequences to blast beats driven eruptions. In its best moments, the album expresses a certain grandeur and / or achieves a profound depth. The guitar leads of 'Rise and Fall' give the listener the possibility to take a deep dive into the musical galaxy of Slechtvalk, to name but one example. Enthusiastic fans of Viking metal will also love the typical melody line that kicks off the quasi title track 'Wandering Shadows' as well. However, Slechtvalk were not able to make full use of their options. The guys did not compose a bad album, yet I predict that it will fall into oblivion, rather sooner than later. The lack of really outstanding songs cannot be overcome.