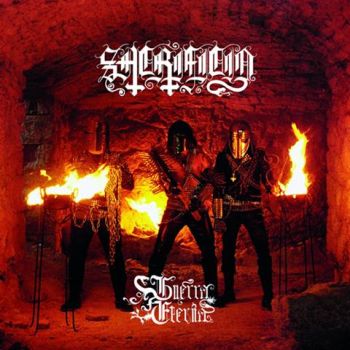 One thing is for sure, these three dudes from Spain have studied the Immortal covers very intensively. The picture that ornaments Guerra Eterna looks like the South European reply to "Damned in Black" or "Sons of Northern Darkness". Anyway, the music does not copy the palace guard of Blashyrkh. A black thrash intermezzo like that of 'La marca del herejo', for example, has never shown up on an album of Immortal. And generally speaking, the Spanish trio prefers a more rumbling sound. Even albums such as "Pure Holocaust" follow an almost fragile approach in comparison with the here preferred style. Apart from the solemn 'Ritos funerarios' and the atmospheric 'Depositio haereticorum', Sacrificio set the focus on a strategy that partially borders on bestiality. In other words, Iron Bonehead Productions sticks to its guns and sensitive minds better stay away.

Yet Sacrificio integrate some non-essential elements as well, for example sublime background choirs and timpanis. I have no doubt that they gave their best to create a good album, but here comes bad news: Guerra Eterna is anything else but a masterpiece. The problem is simply identified. These guys do not know how to pen a compelling song. The seventh track begins with a morbid melody which is accompanied by the aforementioned choirs. Its slightly oriental touch has almost the power to send shivers down my spine. But a more or less abrupt break gives the song another direction. A meaningless solo hurt the atmosphere, further solos appear, and the track is going nowhere. The fundamental riffing does not lack of brutality and sharpness, but it cannot gain the upper hand against the vacuous solos. And things get even worse. The hoarse, non-charismatic voice takes command and the drummer seems to play another song. At the end, they return to the morbid lines of the beginning, but the battle is already lost.

This crude and somehow irritating structure does not remain an isolated case. Pretty good parts are connected with completely strange and misleading sections. As a result, I cannot recommend any highlights of this work. One needs an affinity for slightly eccentric songs which try to combine ugliness, brutality and eerie melodies in order to praise the here collected pieces. Too bad that the band forgot to create a certain density. Especially the rather fast-paced parts lack of compactness and robustness. Dynamic parts that really have an evocative effect remain a rare asset. Maybe it is no coincidence that 'La sombra en la ciénaga' kicks off the album, because it develops a certain energy and dynamic. The guitars play a very good role in this tune, in particular the lively solos. Anyway, this is not enough to impress the black metal world sustainably. To listen to Guerra Eterna is not a waste of time, but there are tons of better works, inter alia almost every album of Immortal.