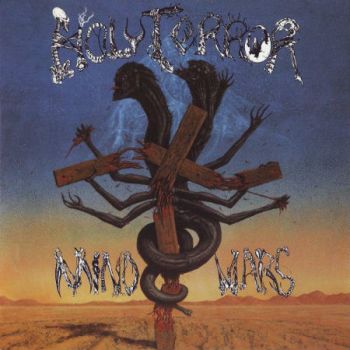 In times of religiously motivated assassinations, the name Holy Terror sounds pretty dubious to me. Honestly speaking, the choice of this moniker was questionable right from the beginning. However, the good news is that the music gave no reason to think about better alternatives. Given this situation, it is one of the tragic moments in the history of metal that Holy Terror never recorded further albums after Mind Wars. So, all we can do is keeping the memory alive, for example by writing a review for the aforementioned full-length.

Holy Terror treated the scene with work that stood with both feet on the territory of thrash / speed metal while simultaneously surprising with a pretty broad portfolio. The track that stands out in terms of style is the dignified 'The Immoral Wasteland', amid-paced number with much room for the relatively melodic guitar leads. They reveal their full strength during the instrumental part after the second chorus where they create a wistful yet mighty mood. This song is one of the rare examples of a powerful yet airy (more or less extreme) metal tracks. Maybe it rather falls into the category of power metal, but who cares? No doubt, this number is among the highlights of the album – and the same applies for the three-tracks-in-one-piece 'A Fool’s Gold / Terminal Humour / Mind Wars'. Holy Terror accelerate speed and 'A Fool’s Gold' has an almost punk-like touch. The second part varies the velocity, before the title track strikes back mercilessly. A great trilogy, indeed...

...with a minor flaw – the vocals of Keith Deen (R.I.P.) have to struggle to be heard. The production of the album is not bad, but it becomes obvious that a guitarist of the band, namely Kurt Kilfelt, was responsible for the sound. The guitars dominate the mix without accepting another element on an equal footing. That’s a pity, because Deen convinced with a strong performance. His voice reflects many moods, he does not lack charisma and he has his own style. Sometimes he reminds me of Onslaught’s Sy Keeler, but maybe that’s just because the riffing of songs such as 'Do Unto Others' is not far away from that of albums like "The Force".

Speaking of this song, it shows the somersaulting side of the band. It is one of two tracks which have not been composed by Kilfelt, but of the second guitarist Mike Alvord. Either this dude was a little bit lazy or Kilfelt suffered from dictatorial tendencies, because both songs from Alvord (the other one is the opener) storm the gates in a matter of seconds. Well, I don’t think that it was Kilfelt’s guilt after having heard the second album of Alvord’s Mindwars, a quite mediocre output – and it surely no coincidence that their third work is called, well, 'Du Unto Others'. But living in the past is probably not the best idea if one wants to reach success in 2020. Be that as it may, Mind Wars has nothing in common with mediocrity. The album fascinates in both categories: it has fascinating tracks and it works as a whole. To put it pretty casually expressed, the best songs are 'Judas Reward', 'Christian Resistance' and everything between them. The rest is shit… but the two aforementioned numbers are the opener and closer. On a more serious note, 'Debt of Pain' is slightly weaker than the remaining material, but maybe it just had the handicap that the song was already known from the Agent Steel debut. It doesn’t matter; Mind Wars has stood the test of time with great ease. The underground is full of gems and this is one of them.