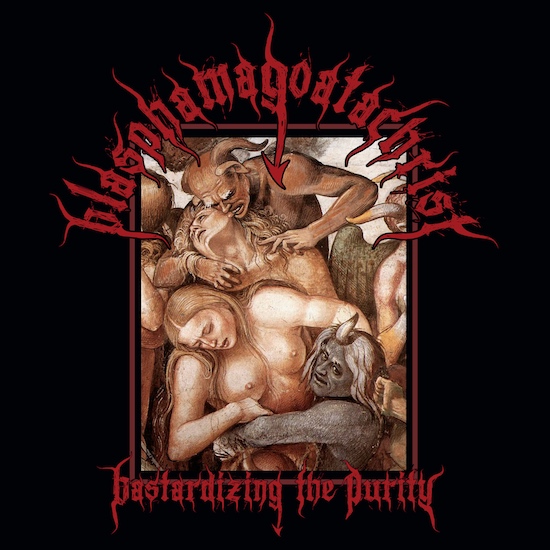 The bestial love affair of Blasphemy, Goatpenis and Antichrist (Canada), Blasphamagoatachrist, continues with a yet more tumultuous march through the blood drenched battlefield of this thing we refer to loosely as war metal. Their debut put on display a fierce summation of and collection of military hardware and tactics now come once again under the chemical terror regime of Nuclear War Now, the joined forces put their weaponry to work on the debuting full length "Bastardizing the Purity". Mutilating riffs of Blood Lust, the crack and cunt crushing commands of Black Winds match the pummeling menace of Sabboath and Coffin Destruction. Bestial war metal at its most violent peak, put into action the grinding gestures, indecipherable vokills and sacrilegious yet inhumane verses to develop slashing and surgical affliction. The horsemen involved here are no strangers to the flash of machinery and agonizing screams of the victimized thus you hear its immense thump on 'Bastardizing the Purity', 'Black Nuclear Shadows' and my favorite of the bunch, 'Abysmal Commands'. Perfect music for a sunny day. Cheetah!.

Whoever handled the mixing and mastering of "Bastardizing the Purity" deserves much praise for a job well done. There's a line drawn between bass and treble while offering the clarity I feel of records by bands such as this works in favor of all the instruments played. It's nearing my third play-through and I still can't get enough of the killer tracks on "Bastardizing the Purity". Not just that but being able to capture the core identity of each band is highlighted on the album; the traits of Goatpenis' riffs and Blasphemy's warlike blasting and vocal signature arrive potently as to give the music the charm in representing a true collaborative effort by 2 sick bands.

I had no knowledge of Antichrist (Canada) until now, they put out a record way back in 2011 which appears to have fared well, so they're worth checking out. But Incinerator of Lacerated Angels and Coffin Destruction delivers an obliterating performance on the drum kit with an array of blast beat patterns, doomy installments and an overall powerful pair of hands at the snare drum. Truly an excellent drummer as he was able to recreate some of Blasphemy's characteristics off their legendary Fallen Angel of Doom on 'Abysmal Commands' and 'Death Alchemy'. In some ways I could see the material here being a less technical, more primitive form of Blasphemy's war metal attributed label in turn giving the album a genuine feel of distinction as if Black Winds on the microphone were not enough.

Just as Blasphemy's presence could be felt on the record such is Goatpenis' Tyrant Virrugus of the Arcane Rites of Blood Lust/Virrugus Apocalli along with fellow bandmate Sabbaoth of the Blood Moon Powerlifting Legion/Evandro Siebert, brought with them the Brazilian dynamic duo attack of barbed-strings in support of the untamed drumming and vox. Going back to 'Abysmal Commands' that has not only the Blasphemy themed musicianship, but similar guitar leads and patterns  heard on Goatpenis' most recent full length and title track 'Anesthetic Vapor' and even some of their earlier albums such as 'Biochemterrorism' and 'Depleted Ammunition'; while Black Winds' ability to transition between signature Blasphemy vocals and Goatpenis patterned ones, echoes his commitment to the material. Thus, apart from just playing with each other respectfully a bit of a challenge is put forth among members with their respective roles, therefore testing each member's ability to adjust through the changing tempos' and pitch variations on 'Genocide Evocation'.

Man this record is just fucking great; usually whenever I hear the term 'supergroup' I'm very reluctant to giving the material a chance; but knowing what each individual brings and the respect they share for the involved bands, was a reassuring feeling to say the least, and they more than delivered on it.

If you enjoyed the "Black Metal Warfare" that was Blasphamagoatachrist's debut upon the battlefield then you certainly will find much elation in "Bastardizing the Purity" that places a microscope over needle and thread to further mend with professionalism the bestial/black/death fabrics into a newly engineered proclamation of terror.