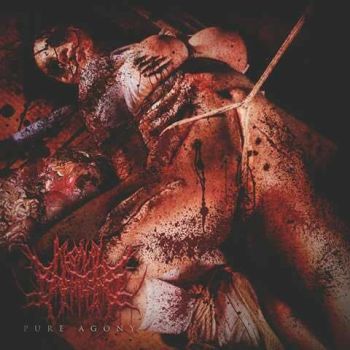 Another amazing album alongside Cephalotripsy's "Uterovaginal Insertion of Extirpated Anomalies"; albums like these are absolute gems in the genre. Who knew this album would be this amazing! Agonal Breathing are one of those bands that mixes brutal death metal and slam together in the purest and efficient way possible. This album has all the musical elements and heaviness of brutal death, with insane amounts of slam. I cannot describe how perfect of an album this is, especially considering the dude playing ALL the music was only 17 during the recording of this. How can somebody so young be this talented??? Perfectly fusing together, the feel of brutal death metal while throwing in TONS of relentless slams. Insane. Brutal slamming death metal at its finest.

The album starts off with an amazing intro that begins with a slamming riff, then the HEAVY bass and drums come in and make everything instantly heavier, then after the intro the first track begins with a small drum fill following with tons of brutal slamming. The sound of the bass is basically the backbone of everything, without this heavy bass this record would lose large amounts of heaviness, you can clearly tell that out by listening to even one song. The guitars are great, they're heavy, persistent and don't suck in the slightest. It’s pretty usual in slam albums that the guitars start to suck after a little bit, but that isn't happening at all on this album. The guitar playing is magnificent, living up to its name and never failing. The drums are another huge backbone here as well. You know damn well slam wouldn't be slam without that loud clanky snare, and it’s definitely here on Pure Agony. Its logical that you can’t mix a weak drum sound with heavy slam riffs; you need that balance. Heavy slammy riffs need a clanky snare and snappy sounding (yet heavy) bass drums. Some may complain about the snare sound, (which is understandable) but snares like this are what is usual with slam, and this is definitely not one of those shitty clanky snares, this is the most perfect snare for a brutal slam death album. On your first listen the album the snare may be a slight bother, but you'll definitely grow into it as you relisten, because this album is incredibly good and catchy. Slam albums with unclanky soft drums suck major ass most of the time, obviously. Aside from the drum sound, the playing ability is awesome, he changes from simple cymbal-bass-snare patterns to fills, and blast beats; continuously, and trust me, it doesn't get old.

All the songs may sound similar, but it doesn't get annoying or repetitive at all. Is it just a LITTLE repetitive? Yes, but if you listen to this whole thing, it’s not really that repetitive. You can tell that Luis spent major time planning out this album from the heaviness of everything, the way the drums will be played, to the songs and variety the album has. This is truly the ideal brutal slamming death metal album. Also, to mention the vocalist, he's great too. Good vocals indeed but to be honest, the musical aspects of this album is so good, that you don't even need the vocals. I can listen to this without the vocals and simply enjoy the goodness of the music, just saying. Luis did an excellent job on this album. Again, with him being the only member that plays all the music, you can't not give him praise for the job he’s done. He's one of the very few people that has perfected brutal slamming death metal. This is also a genuinely loud album. At any volume it's still quite loud, which is awesome as fuck! It seriously can’t get better than this.

There's so many slamming brutal death metal bands out there these days, and Agonal Breathing is definitely one of the ones that deserve lots of attention and praise. This album is no doubt legendary, no explanation needed. This is pure greatness and talent. If you want to invest your time into some good brutal slamming death metal, I highly suggest Pure Agony, and you best blast it at full volume.