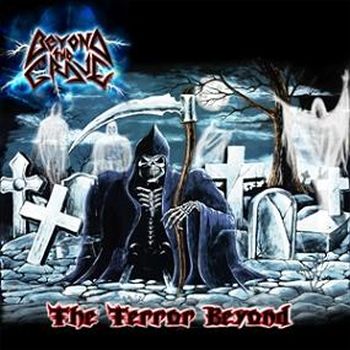 Dear friends of innovation and progress here comes another disappointment for you. The Terror Beyond does not focus on offering new elements. Its originators worship old Slayer and the raw thrash albums from Germany, for example Deathrow's first works and they are surely familiar with "Endless Pain" and "Pleasure to Kill" as well. Their typical South American enthusiasm adds the final touch and therefore we have another collection of explosive, impulsive and roughshod tracks. The omnipresent high velocity cannot be ignored, the sinister harmonies and the rude vocals must be mentioned as well. No doubt, this group has enough power to deforest the whole Brazilian jungle.

Showing the influences is no crime, although some sections lie in an extremely close proximity to those of the role models. Beyond the Grave deliver rasping guitars in abundance and they are mostly accompanied by morbid harmonies that scream "Haunting the Chapel" or "Reign in Blood". I guess they want to be taken seriously, but it nearly appears as an act of self-mockery that they have called the last track 'Bloody Reign'. Either way, the ghosts of Kerry King and Jeff Hanneman (R.I.P.) are lurking around. Too bad that their presence does not prevent that a few parts are going nowhere. It is seemingly a challenge for the band members to channel their remarkable energy in the most effective manner.

Originality is written in small letters, only the beginning of 'Speech of an Assyrian King' breaks out of the scheme of violent vehemence. By the way, this song and the more or less political 'Conflict Zone' deals with the situation in Israel, holds the best lyrics. But do you really expect great, thoughtful lyrics from songs like 'Hail of the Corpses' or 'The Shadow Killer'? Surely not. By the way, the latter has some really good sections and the following instrumental with its sinister lines during a mid-tempo part and the framing swift riffs marks another climax of an album whose more or less hidden track, a cover version of Destruction's "Curse the Gods", uncovers the inspiration of the band for the final time.

The powerful production and the sufficient technical skills of the musicians complete the picture. The lads of Beyond the Grave are no amateurs, even though the artwork might give a different indication. As a matter of course, one can call albums like The Terror Beyond superfluous, because they do not open the gates to another musical dimension. But how many outputs meet these criteria at all? The here reviewed work sounds sharp, brutal, coarse and hot-blooded and that's exactly how this kind of music should be. It's a pity that some sections just pass by. Nevertheless, this work is recommendable for fans of furious (death) thrash metal, but not for the friends of totally new sounds.