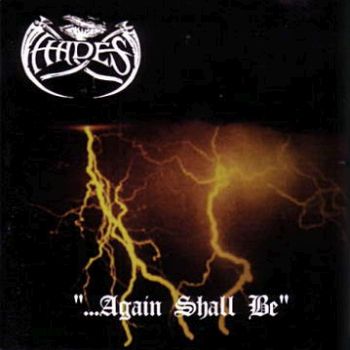 Type: Full-Length
Release Date: 1994
Label: Full Moon Productions
Genre: Black, Viking
1 Pagan Triumph
2 Hecate (Queen Of Hades)
3 The Ecstacy Of An Astral Journey
4 An Oath Sworn In Bjorgvin
5 ...Again Shall Be
6 The Spirit Of An Ancient Past
7 Unholy Congregation
8 Glorious Again The Northland Shall Become
9 Be-Witched
10 In The Moonless Sky
MetalBite on YouTube

Some albums seem to be loved by everyone who has got in contact with them and both ...Again Shall Be and its successor The Dawn of the Dying Sun belong to this rare species. This is no coincidence, because these works truly emanate their own, nearly unique flavor. Hades appeared on the surface during the heydays of the Norwegian black metal resurrection, but they were a kind of outsider. Unfortunately, not in terms of criminal actions, but with respect to their music.

Ironclad guitar leads lay a carpet of steel and some keyboards support cleverly with simple means. 'The Ecstasy of an Astral Journey', for example, profits from a great keyboard tone that accompanies the guitars at the end of the title and the repeated pleading conjuration of the "burning midnight skies" gives the song a ritualistic touch. The mid-paced title track marks another example for the ability of the band to make good use of the keyboards. Here this instrument shows up at 2:30 minutes and intensifies a piece which has already been very intensive so far. However, the main part of the music is delivered by the guitars and that's how it should be.

Speaking of the guitars, they create a monolithic overall impression. If the musicians were architects, they only would build strongholds with very high and thick stone walls - and once you have entered the inner courtyard, there is no escape. Without offering a great number of "medieval" melodies, the band creates an archaic, cold and inclement atmosphere. Outbursts of velocity do not force their way, but the desperate screaming of the lead vocalist and the heaviness of the guitars create a non-conform aura that does not stand in the shadow of other Norwegian records from the nineties, regardless whether we speak of "In the Nightside Eclipse", "Pure Holocaust" or "Hvis Lyset Tar Oss". Hades had no role models to lean on, at least in their domestic scene. This makes the debut all the more precious. Back in 1994, its sublime music was more or less second to none.

The majestic blackness of the music has a mesmerizing effect. Although the dragging guitars seem to build a bridge to the doom metal genre, I would say that the black metal components predominate. The group has also integrated some very masculine, sometimes accusing background choirs, nevertheless, I would like to avoid the term Viking metal. From the beginning till the end, ...Again Shall Be is imbued with the sheer magnitude of black metal. The melodic instrumental part of 'Be-Witched' does not wipe away this fact, even though it offers almost optimistic sounding harmonies. Yet this is just the old story of the exception which proves the rule. Usually, malignancy is the constant companion of the melodies on this sinister full-length.

The here reviewed album holds no outstanding earworms, but an extremely homogeneous overall impression. Serious weaknesses do not pop up. Thus, it is an irony of history that the band had to change its name due to legal reasons. In hindsight, it seems as if they had just forgotten to add the attribute "almighty" right from the beginning. The music itself deserved this characterization from the get-go.