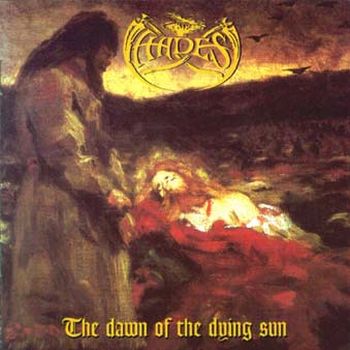 After an excessive hiatus of more than a decade, Hades (Almighty) have returned and two of the three new songs are simply fascinating, inter alia because they reanimate the old spirit of the band. I would like to take the opportunity to recollect their first two albums under the banner of Hades. I am sure that they still deserve our admiration.

Back in the nineties, the Norwegian hordes were shooting up like mushrooms. Hades were surely inspired by their creative surrounding, but they did not forget to take care for a unique feature. No doubt, Immortal released heavy music, Emperor released heavy music and Gorgoroth released heavy music. However, it was Hades who delivered that incredible extra portion of profound heaviness. The rather slow tempo made it possible, but this was not the only factor. In addition, Hades knew how to work with strong metaphors. The Dawn of the Dying Sun, already this title spread an intense and sinister aura. The "dawn" symbolized death and the "dying sun" made clear that there would never be any form of new life. Finally, the band created extremely desperate, woeful or melancholic riffs and it goes without saying that lead vocalist Janto sounded like a tortured soul in order to emphasize the effect of the mature guitar work. This approach did not push each and every song to the highest level, but The Dawn of the Dying Sun delivered a lot of very exciting material.

'Alone Walkyng' stands in the center of the album, an excessive number with a very atmospheric beginning. Its majestic appearance leads to the black core of the band's musical understanding, although the track is a little bit too long. The following 'Crusade of the Underworld Hordes' shows that a more compact configuration can be helpful. Just like 'Alone Walkyng', it starts with a promising acoustic guitar which has to give way for an ultra-evil assault. This granite block is so heavy-weighted that it surely has the power to shatter your spine. But who wants to live healthily? The song is based on a varied pattern and avoids any signs of boredom successfully, not least because of Janto's evocative vocals. Yet the most compact track is the opening title track itself. While being confronted with the dark overall appearance, it’s almost fragile main riff sticks in the listener's mind immediately. It shows up again and again, but, nearly tragically, it always melts away quickly, too. In a nutshell, this opener indicates that a fantastic album wants to be consumed.

I may not forget to mention the sluggish yet not lethargic 'Awakening of Kings' that begs fervently for the comeback of the northern rulers. This number shows impressively the level of intensity that a slow piece can achieve. Once again, Hades create an appealing contrast between an acoustic guitar and the almost bloodthirsty aura of the electric guitars. The slightly unclean, yet very dense mix underlines this approach and, of course, the remaining songs also profit from this sound. Well, the tracks that I have not mentioned so far have to take their seats in the second row. Moreover, one can debate the necessity of the soft intermezzo ('The Red Sun Mocks My Sadness'), but I don't think that such a discussion leads to reasonable results. It makes more sense to the look at the big picture. While doing so, it becomes clear that the Norwegian darkness has taken possession of the four musicians. In addition, there can be no doubt that these guys are worthy representatives of their home region, because The Dawn of the Dying Sun, equipped with an excellent artwork, combines strong compositions with an expressive staging. Viking elements and black metal components go hand in hand. Only one thing bothers me: I am sorry for lowering the average rating, because the second album of Hades was and is a really formidable work.