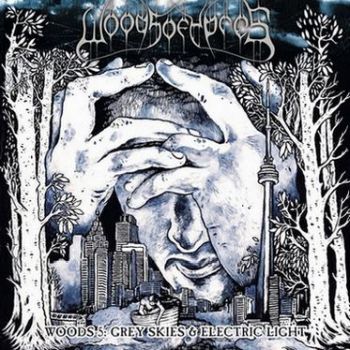 When it comes to hopelessness in metal, there's a few subgenres that immediately spring to mind. For me, it's depressive black metal and funeral doom at the forefront for bleakness, with maybe some of the more despairing releases of raw black and drone behind. Gothic metal would scarcely even be remembered, let alone considered. And yet there exists an album called Woods 5: Grey Skies and Electric Light, a sixty-minute experience so utterly devoid of joy it actually manages to eat away at my own determination, drive and purpose every time I listen to it.

There's many different approaches to conveying despair in music; bands like Sunn O))) do it through suffocating, droning dissonance while other acts like Advent Sorrow and Wormphlegm rely on tortured, shrieking vocals to drive their agony into you. Woods of Ypres, on the other hand, go for a much more simplistic approach. They employ slow but assonant melodies, giving the beginning of the album a deceptively happy tone, then contrast it with David's vocals, which could never in a million years be called happy. He uses both high, blackened screams and monotonous baritone singing (at times almost spoken-word) to great effect, conveying the numbness that comes with depression perfectly. The joyful instruments on the surface combined with sad lyrics make for a pretty on-the-nose metaphor for hiding your sadness behind a smile, but it works.

It's actually a running theme on the album: things that seem juvenile or immature from an outside perspective just work. The reason for lies with album's greatest strength - the knowledge that it's completely genuine. Lyrics that objectively have no more intricacy or depth than the stuff Three Days Grace have been churning out recently ("I only had one life to live, and life said no"? Really?) hit much harder purely due to the knowledge that they're a real expression of real feelings. Hearing a dead man talk about death so plainly is both harrowing and eye-opening, especially on tracks like 'Death is Not an Exit' and 'Kiss My Ashes (Goodbye)'. It's an insight into the mind of someone who's truly given up all hope, who's been ground down by an unfair, nonsensical world, and the conviction with which he tells his story makes it feel so real that it's bound to get into your head at least a little.

On the opposite end of the spectrum to those gothic, doom-y tracks we have the faster, more upbeat, more hopeful side of the album, most notably 'Career Suicide (Is Not Real Suicide)', but even here, where the instruments are uplifting and melodic and the lyrics seem to take a pretty standard inspirational theme, there are signs that not everything is alright. The stream of consciousness style repetition of the chorus, for instance, feels like someone desperately trying to convince themselves that what they're saying is true, that there's still hope for them in life, and so even the joyful, happy songs have a dark and sinister undertone. There's no relief to be found on Woods 5.

As you've probably guessed by this point, David Gold was not in a good state of mind when he wrote this album. The exact circumstances of his death still elude us, but the content of this album gives me a horrible feeling that the car crash which ended his life might just have not been accidental. It's a nagging suspicion that persists throughout the record but truly comes to fruition in the last two tracks. I'll be honest, despite braving a listen for the first time in years to write this review, I didn't have the mettle to listen to that pair of songs again. They're far too raw and the lyrics link to his death far too well for me to stomach (especially on 'Alternate Ending'), and as a result they're some of the best tracks on here even though I'm going to make a conscious effort to never hear them again.

To conclude, Woods 5 is a fascinating yet haunting swansong for David Gold, ironically standing as a monument to him and his legacy despite his opposition to having either of those things. It's something you appreciate not for the intricacy or artistry but for the rawness of emotion expressed, the kind of album you'll only want to experience once but you'll end up thinking about for years to come afterwards. This is about as far from easy-listening as you can get, so much so that I've come to a decision: after giving this release the acknowledgement and high score that it deserves, I'm never listening to it again.