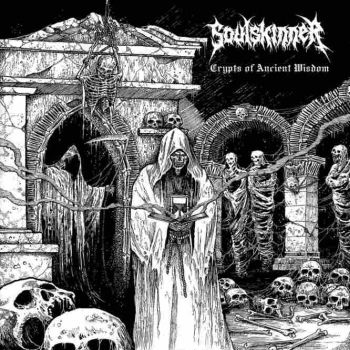 Coming from the ancient catacombs of Greece, Soulskinner performs a very solemn and somber death metal style on their 2014 release Crypts of Ancient Wisdom. Evolving from a 3-piece on their first record, Breeding the Grotesque, and a 4-piece band in their second one, Non-Stop Killing, Soulskinner seems to be like a good bottle of wine, as its ages tastes better. I have to say that I did not enjoy their first two records as I did with their third one, let´s find out why.

Crypts of Ancient Wisdom is a duo effort that really caught my attention because of its solemn and somber approach of death metal. This album reeks death all over from the cover art (designed by Mark Riddick), the lyrics and the sinister music performed by Bill (guitars, bass and songwriting) and Gothmog (vocals and lyrics). Breeding the Grotesque and Non-stop Killing were directed towards a gorier focus, average death metal performance and horrible drum programming (at least in their first record). I wanted to hear something more bleak and obscure. That's why I really enjoyed Crypts of Ancient Wisdom, this record gives you all the grimness and more.

The intro kicks with some acoustic guitars that are beautifully played but behind the beauty there is sadness and uncertainty, a metaphor of life disguised in ominous strains. 'The Captive Trojan Maiden' hits you with a straightforward Hellenic death metal style. No references to U.S.A and Sweden death metal, no blends or mixes here or even references to big death metal bands. The music is moody and atmospheric, it drinks from genres like doom and old school death metal, but not specific bands come to my head to compare with. I think Soulskinner has developed their own sound here. For instance, 'Life a Bane', 'Our Greatest Curse' and 'Deadland Part 2' are testimonies of a unique style that crushes your soul as you listen the solemnity of each song.

Lyrics are very mysterious and are based or adapted on writings of classical Greek poets and philosophers like Euripides, Sophocles, Agathias and Sappho. The lyrics are reflections of war, life and death, fitting perfectly with the concept of Crypts of Ancient Wisdom. For example, “The thin edge between life and death, colder by the hour, more dead with every breath” is a philosophical passage in the song 'Our Greatest Curse' that depicts what the lyrics are about. The fact that Soulskinner evolved from gory topics to these more thorough lyrics is a plus to the album and differentiate them from other bands.

There are many highlights in this record, for example, 'Deadland Part 1', 'Deadland Part 2', 'Our Greatest Curse' and 'Why Shrink From Death' are relentless songs that balance different moods and atmospheres. From fast tremolo picking guitars to melodic passages and crushing ambiences. I would say and I don't want to sound pretentious here; that Soulskinner has this Hellenic death metal sound that makes them different to other bands in the genre. Plus, their lyrical concept is also a very regional approach that refreshes the genre from clichés and repetitive acts. I´m looking forward to listening to their latest album called Descent to Abaddon to see if they continue in this gloomy fashion.