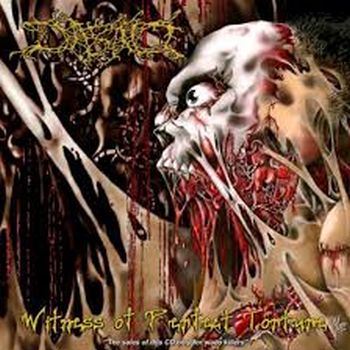 Jasad is one of those Asian bands that are good as hell. They debuted with their album Witness of Perfect Torture, and it's just as amazingly brutal and nasty as you can get. They've released a few demos before their debut, but my god, this album is just an amazing start; especially since they're a brutal death metal band. The title of the album and the album art describe it all, pure gore and torture indeed.

The album starts off with with an extremely deep guttural-gurgling spoken word intro, then after that the brutality comes forth immediately! All the instruments come in at once and grind away while Mohamod growls and screams away! This is just amazing, seriously. The guitars have a thin yet heavy sound that's perfect for brutal death metal, and the snare drum is clanky and very much present. There's nothing better than playing a brutal death record and hearing that perfect grindy guitar tone, and that clanky snare drum with a bass drum sound that snaps away behind it, this is just literal perfection. And the way the guitar is set up and written, there would definitely have to be bass. This album would sound extremely bare and less brutal without the bass. On 'The Amelia's Revenge', the song starts off with a sexy bass intro and to start off a brutal song with a great bass intro literally just proves how much bass is needed here. Once you hear the bass intro, you hear it on the rest of the song, and the album too. Amazing.

Another brutal death record that has the perfect length! It’s a known fact that pretty much every brutal death album that surpasses 45 minutes gets real tiring and dull, thanks Jasad for making this album the ideal length. Every song on here is neither too long nor too short. 3 minutes and below is the perfect length for a song in this genre, and that's what we got here. This album has also got variety, a damn great variety. On your first listen you'd probably expect this to be repetitive and contrived, which if you listen to the whole album, it’s obviously neither of those. All the songs have the same brutality but they're all different, which is very essential especially in a genre like brutal death metal. There can’t be too much repetitiveness. We need musical balance.

Witness Of Perfect Torture is a kickass debut album. Grinding, thin, yet brutal and heavy guitar tone, clanky and tight snare drum with snappy machine gun kick drums, deep bass sound with present and vital playing ability, AND extremely guttural vocals and insane, chaotic, and probably culturist screams? What could be better?!? This is brutality at one of its finest points.

I'm so glad we have bands like these that just put out great ass albums that don't flop at all, Jasad being one of them. They hail from Indonesia, and from what I've heard they're pretty known in their country. Thanks Indonesia for spawning out such amazing death metal bands. All these bands in Asia are starting to come out, forming these small underground death metal cults, which I love. With all these new bands coming out especially in Asia, it’s getting more people into this music and spreading death metal even farther. These guys deserve much much more attention in the brutal death community. If you haven't heard this band yet, go the fuck and play them right now! Spread these guys around! This is an album that needs more attention!