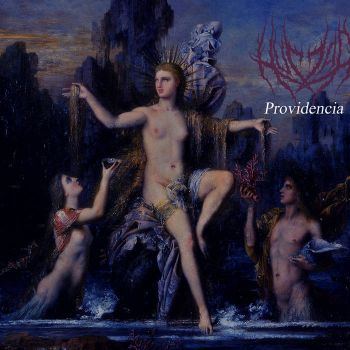 Huszar is a one-man band created in Argentina in 2015 by Marcos Agüero, who has been pretty active in the scene since that year. In fact, he has created another three projects, which are related to the atmospheric black metal genre with the exception of Desprecio. Going back to Huszar, we can say that this has been the most active project, as it has already released tree albums, alongside with some singles and splits. The album I am reviewing today is its last offering but not strictly a new one. The original recording was released two years ago and now it has been remastered and re-released by Morrowless Music, a new label founded by the well-known leader of the Swedish atmospheric black metal project Lustre, Nachtzeit. Thanks to this, Huszar’s Providencia has a renewed production and a truly beautiful new artwork, which surely will catch the attention of more fans, especially those in the European scene, as this release was originally more restricted to the South American scene only.

This remastered version of Providencia is a quite fine example of what Huszar does. The project is a quite interesting mixture of atmospheric black metal, some progressive influences and a good dose of post-metal. This means that the album's tracks flow in a very natural way from the quite straightforward aggression, heir from its black metal influences, to a quieter and more instrumental- esque sections, which are strongly influenced by post black and blackgaze. The instrumental post metal influenced sections cannot only be found as a part of the sung tracks, but also as full instrumental compositions, like for example the third track 'Providencia III: La Flora que Crece Alrededor de Nuestras Catedrales'. The most aggressive and blackish song like 'Providencia IV - De los Cometas en Llamas Hicimos Vuestro Culto' balances the album with a welcoming forthright strength. Marcos delivers a quite competent vocal performance, with the expected shrieks which sound powerful, alongside with a quite well composed guitars with an unmistakable black metal style. Drums sound well executed, with a healthy combination of blast-beats and a more diverse patterns. The purest mixture between the already mentioned influences have a greater room in the second and fifth songs, thanks to their generous length, clocking both over 15 minutes of time. Though the post, progressive and ambient influx can be found in almost every track, these longer compositions make possible to mix sections of every style in a quite natural way, flowing the track between seas of calm and moments of stormy fury. Those tracks are very tastefully composed and one of the best aspects is that you can't complain about their length, which is always a good aspect. The remastered production makes the album sound more clear and balanced, especially on the guitars, which help the compositions to shine as a more solid set.

Providencia is definitively a very good piece of atmospheric black metal, enriched with interesting and varied influences, where the compositions have been matured to sound elaborated yet reasonable easy to listen. An album which lasts more than one hour can always be a demanding listen, but Huszar makes possible to enjoy it without complaining too much about its length. I recommend keeping an eye on this project on its future releases.