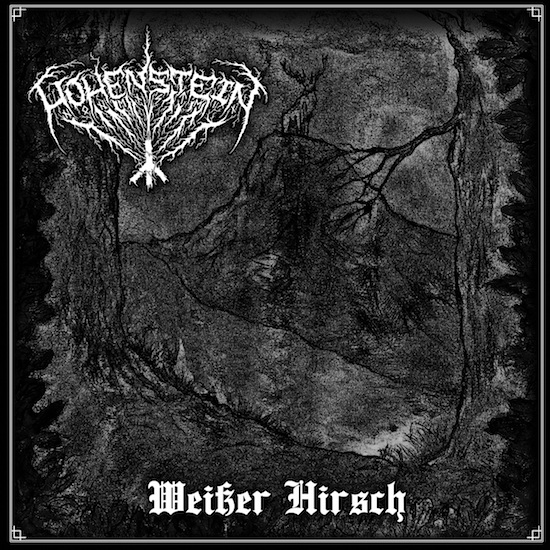 Can't get the melody of 'Sundalschlacht' out my head, so I thought, if this is what Hohenstein promises then I'm all ears. And what became of their first album?, a spell of sonic beauty all the while a mid-paced battle march of axe, claw, dagger, sword and shield. But not limited to or the only features of Weisser Hirsch. From the serene sounds of nature driving the acoustic 'Brøhn', to the boiling temperature of the album's opening moments on 'Kriegsvintar', Weisser Hirsch paints within its organic fabric, the sounds taken for granted daily to the point of being ignored and foolishly destroyed. The siren of birds chirping, streams flowing and nature itself towards a forlorn species undeserving of such benevolence. Hohenstein bring to the front the immense marvel that is nature alongside the devastating blow of death and war.

All of Weisser Hirsch is mid-paced, leaning towards the doom side of metal that works out if you consider the themes on the album. This pacing helps greatly in communicating the message of atmosphere beit dim, bright or melancholic as on 'Grüner Altar', 'Ewige Flamme' and 'Runenkrieger' of which absorb and leaves the listener no choice, but to stay until the final track is played. This is what you want from an atmospheric album, a collection of songs which flow with graceful momentum, delivering on a relevant, concise and thematically composite and engaging experience.

Weisser Hirsch is tailored for the slow and steady, it shows to the listener it has no intentions of hasty movements and goes about its business un-bothered about its pacing, arm in arm with nature, melancholy, beatitude and bitterness.