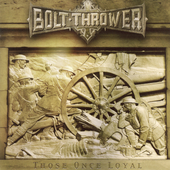 British humor is something special, no doubt about it; mostly very dry, often very black, sometimes pretty direct and a combination of understatement and absurdity. Well, the albums of Bolt Thrower are usually not known for their great portion of humor. However, the band loved to make a joke in the booklet of its farewell work. I will come back to this later.

Those Once Loyal is definitely a worthy final chapter. It picks up the typical formula of the quintet and gives birth to great songs. The mix of grinding guitars and melancholic melodies, of almost hypnotic lines and the deep growling of Karl Willets works excellently. Moreover, the approach of the bolts throwing musicians was more or less unique. Bolt Thrower connected groove with sadness, depth with accessibility and heaviness with melody. Show me another death metal band that is able to do the same. In addition, the monolithic appearance of almost all Bolt Thrower full-lengths is something that adds an extra portion of value to the material. Jo Bench and the four dudes were the grandmaster of thick yet well-flowing death metal. They had found a unique song formula. I know, “unique” is a big word, but it’s always easy to identify a track as a Bolt Thrower song. And if one fails, she or he is probably listening to a band that copied the style of the British flagship, for example My Darkest Hate or Just Before Dawn. (By the way, these imitators also have some good songs up their sleeves.)

Those Once Loyal holds nine tracks and each and every one has the charm of a constantly firing tank. And it goes without saying that these tanks roll over everything that is in their way, barricades, bones or command posts. Almost hectic tempo shifts like in “Last Stand of Humanity” remain the exception. Usually the tanks roll stoically, because Fenriz and Nocturno Culto are probably answering their fan mail and so nobody is out there with a Panzerfaust in order to stop the iron machineries of destruction. But the good news is that actually nobody wants to stop them, because they create another fantastic battlefield with their majestic and nearly noble sound. Speaking of the sound, it is simply flawless for the kind of music Bolt Thrower performed. The production can brag with vigor and robustness. Not to mention its oppressive atmosphere. Furthermore, it’s a matter of course that the good old signature riff of the war correspondents reappears in full bloom. It makes the mercilessly grinding “The Killchain” to a highlight of the work, but there are many awesome songs to find. “Entrenched” beats the strong opener, the title track could be a leftover from their masterpiece …for Victory in view of its very accusing chords and the formidably flowing “When Cannons Fade” sets the final impulses.

To complain about a certain uniformity of the songs would be stupid. Either one understands the business concept of the five-piece or one should listen to something else. Or to say it with the band itself: In a world of compromise… some don’t (read: didn’t). And to be quite clear, the restlessly humming of the guitars portrays the roaring of the tanks perfectly – and the drum work also shines with precision. The outstanding output ends with some lonely beats of drummer Martin Kearns (R.I.P.). In view of his untimely death, it’s almost an ironic twist of fate that he was the last one to be heard on a Bolt Thrower album.

But let us leave this sad chapter – I wanted to speak about the British humor. The booklet tells us: “Lonely are the glorious”. This must be a pretty cynical joke, because I have the strong suspicion that here “glorious” can be understood as a synonym for “victorious”. But if the glorious ones are already lonely, what about those who could not win? Charles de Gaulle once said that we can see the character of a nation by the way it deals with its soldiers after a lost war. Today we know that some nations were not very successful in this context.