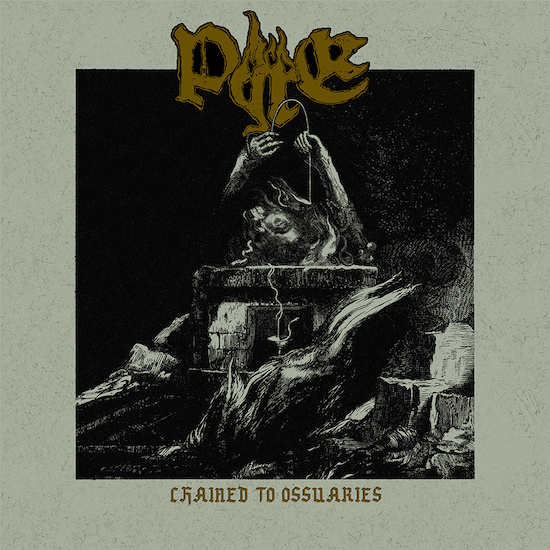 Often thought of as an exotic area for metal (by me at least), though continually growing, the region's metal bands have thrived mostly in obscurity than under the brightly lit surroundings of popularity. With that obscurity, comes a quality that is often taken for granted in metal via accessibility. Pyre instead walks a tightrope between cleanly produced death metal and retro genuinety. After hearing Chained to Ossuaries, the primary takeback is that of satisfaction being a result of the band's amicable incorporation of quality, accessibility (put lightly) and sincerity into their labor.

It was only a few years back that I had the fortune of discovering some exceptional acts from the region (one of which is still active) that blew down the fortifications of underground death metal and the other (Scald, R.I.P Максим Андрианов) though no longer active, released the best epic doom metal album I have ever heard. To add to the list of cherished finds is Pyre's Chained to Ossuaries, that even while being influenced by Swedish and American death metal, has a charm that overshadows the obvious derivatives.

Following the brief intro, 'Exordium', 'Impaler the Redeemer' arrives with most of the etiquette you'd expect to hear from a death metal album borrowing from Swedish and American traditions; buzzing HM2 effects, a type of thrashing marked by Possessed and a groovy grip tightly applied to the music. The track is more a throwback to 1992-1996 which I don't think anyone would have a problem with, at least if you like good death metal. However, I think it’s 'Wreath of Crucifix' and 'Across the Shores of Emerald Fractals' that Pyre starts to really cook and fall into their zone. Though one is faster than the other, they both appear to have some connectivity, an undisturbed effusion linking them together, such that the music does not sound like just a collection of songs.

The writing improves as the album progresses with entries like 'Ornaments of Bones' and 'Chained to Ossuaries', sporting greater dynamics by merging Asphyx-esque doom metal sections with rivaling thrash metal guitar solos. It's almost as if with each track that passes, you'd have no choice but to select a new favorite, the songs are that good without incorporating too much experimentation or unorthodox features, hence 'Antae to the Nothingness' with its slight progressive/psychedelic/stoner rock demeanor toward the end.

That "charm" referenced earlier is that of Pyre's musical assembly, that'd meet its peak on the album down the order with 'Crown of Death' and aforementioned 'Antae to Nothingness' catapulting the Russian trio's compositions by enforcing less predictability when moving about mid paced, thrashing and doom metal parts. In addition, there is a noticeable trade of compliments and challenges occurring between drum and guitar on most songs that gives the album a spirit of competition.

In conclusion, you could rearrange the songs in any order, and you would get the same pleasure if not more on Chained to Ossuaries. And like many albums that'd have one side dominating the other, this feels like one long A-side as all the songs are so strong. Chained to Ossuaries is proof of Pyre's respect to the spirit of death metal.