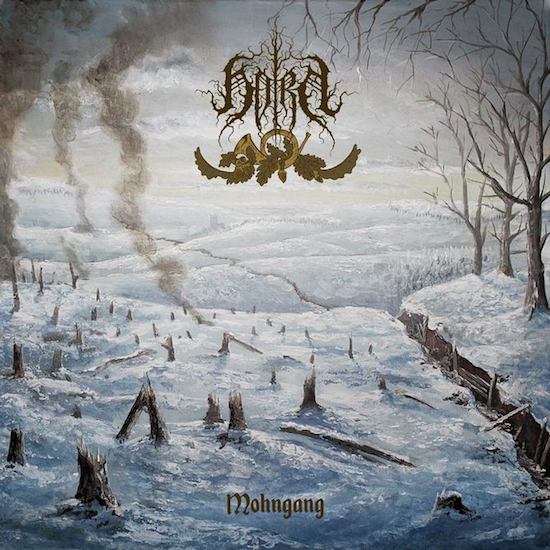 After hearing the new Árstíðir Lífsins and Kawir albums of 2020, selecting a better of the two was far too much of a challenging task to undertake; now to increase the burden of crowning the best pagan black metal album of 2020 thus far is Horn with its new album, Mohngang. Out on Iron Bonehead Records 15th May 2020, Mohngang rises to the occasion in not just competing heavily within the vast-lands of the sub-genre but challenges itself in attempt to out-do that of all its previous releases, as every band should. Mohngang with startling precision manages to capture beauty, glory, and tumult with a shuddering array of hymns all sincere to the idea of pagan black metal.

Controlled by one Nerrath, the project has an unbelievable amount of quality releases that have garnered the revere it has today alongside aforementioned bands. And when placed in such a prestigious category and/or lauded by the masses in this grandeur manner, it would come as no surprise the entity with a peacocking passion, puts on display the best it has to offer to date. Mohngang should resonate with anyone who appreciates greatly well thought-out music and black metal for that fact. Hence there's no politicking whether or not the record's standard is of praise or not.

From the instrumental album opener 'Einleitung - Der Wettlauf zum Mee' to the very last tale 'Die Mit Dem Bogen Auf Dem Kreuz (Cello Version)', Horn ensues a comfort of mystical all the while perilous land and seascapes with which to engulf the listener completely. Never tiring, Horn finds new ways to retain the listener/s attention, whether it be the catchy chorus of 'Satt Scheint Der Sud Der Tat' or the mid-tempo folk and acoustic wander of 'Upstream Canals, A Ship's Bell Sounds', you feel a sense of movement within these songs that take you from mountainous lands to serene and void-like tempestuous seas to shimmering skies and back. Matched by a humble pacing, transitioning from one place to the next feels thoroughly silky smooth all the while proving to be a warming experience.

None of this could be possible had it not been steered by the grace of Nerrath, whose roaring compositions descend upon the listener with a sense of snowy celestial beauty expressed through a black/heavy metal bombasticity of a song like 'Wär nicht Traubhagel' that'd dig far and deep for an essential equipage of pagan properties to compliment the sonorous vocals of Nerrath. Whether it be his snarls, pagan chanting on choruses, or heartfelt humming on 'Handkreis und Chor', his vocals possess an esteem of diligence that in turn emulsifies with the tranquil massage of his guitaring and drumming. Merged with the many folk instruments and even the cowbell heard on 'De Står Her Somsletta', Mohngang lifts itself from being just another addition in the genre, to being a rune of near-flawless craftsmanship.

Horn's work is meritorious in making Mohngang a relic of past ages, rediscovered and cast into the here and now like formations of dunes blown form centuries ago.