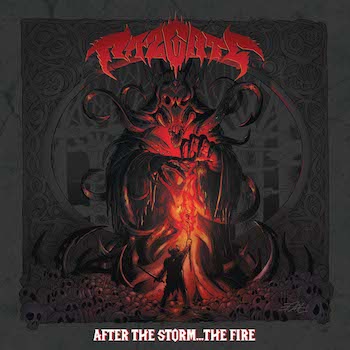 Real thrash has become a rarity in times when black metal rules the extreme underground. Given this fact and generally speaking, I appreciate that Razgate from Italy fought back (although I cannot get enough of good black metal as well). While using modern record technologies that gave the album its powerful yet somewhat oversized sound, they swing the axe of (mostly) pure thrash.

Okay, 'To the Rope!' bows down to the punk-influenced songs of Slayer and sometimes the screaming of the lead vocalist borders on hardcore shouting. Aggravating the situation, his voice is not blessed with an overdose of expressiveness. However, he does a solid job – and his comrades on guitar, bass and behind the drums do the same. Metal is riffs, thrash metal is even more riffs and Razgate, who love to perform a pretty aggressive, non-melodic and belligerent kind of thrash, have some aces up their sleeves. Discrete mid-paced mosh parts like the one in the title track complete the picture.

Nevertheless, usually Razgate’s sound sets the focus on velocity, which is staged by a proper number of tempo shifts. Too bad that not each and every song part blends seamlessly with the next one. It’s already the third full-length of the quintet, but there is still room for improvement in terms of song-writing. A higher degree of individuality would also be fine. Maybe they should learn to channel their energy in a more focused way. Well, nobody’s perfect… and there is still a sufficient number of good (yet not overwhelming) songs.

'Behind the Walls of Terror', for example, explodes after 83 seconds very excitingly - and further explosions follow. 'Broken by Fire' marks the most coherent track and its thrilling bridge boasts with a surprising level of catchiness. Doubtlessly, the band is able to perform the material in a tight and precise manner and the songs benefit from this. In other words: it’s a typical Punishment 18 album. Thrash metal maniacs know exactly what they will get and it lies in the eye of the beholder whether (s)he appreciates the reliability of the label or (s)he hates it's boring predictability. From my point of view, P18 offers a stage for pretty competent bands whose evolution process is not finished yet. Usually these formations deserve to get a positive but not excellent rating. Razgate are no exception.