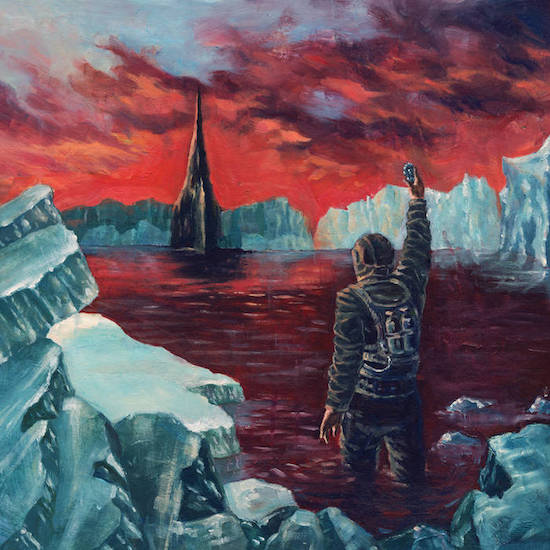 An interstellar, shapeshifting, ambient, technical, progressive death metal black hole of cosmic soup; enter the coordinates and compute the trajectory of an eonian star system undergoing some sort of galactic reconfiguration through periodic combustion. Like a Nucleus but not quite, a Timeghoulean Vektor? perhaps, with the aid of a Teleport and of course, Blood Incantation, Cryptic Shift has arrived with a set of algorithms amongst other unidentified sequences on their debut and TRULY highly anticipated full length, Visitations from Enceladus, long in the making since 2014.

The UK seems more active than I could previously recall, perhaps the chem-bruised skies and the winter-gloom hovering over the region's hemisphere have been igniting a creative boost finding its way to various underground metal labels.

From a distance the activities on Visitations from Enceladus formulate a weather seemingly inclement from a distance, yet with time, the drift towards the cortex of the planet's nucleus reveals a rather intelligent assembly of local and foreign elements somehow compatible with each other's circuitry. Of the earthly and extraterrestrial, this combination has birthed the many tonalities and serpentine compositions.

A 25 minute 'Moonbelt Immolator' cauterizes to the point of feverishly radiating the listener/s senses with an assortment of metallic components molding the framework of what would come to be Visitations from Enceladus. Recognizably death metal elementation to anyone yes, but within the capsule, a comprehensive build of hybridized amalgamations falling into geometrical and non-geometrical shapes. Progressive grooves intertwine with a mathematical riff and chord structure sharing time at the steering wheel of the vessel. Speciated at certain intervals with the addition of quirky and non-conventional frequencies providing a sincere sense of a lurking visitant, while pick scrapes and exclusively progressive brief sections within '(Petrified in the) Hypogean Gaol' and 'The Artic Chasm' provide an aesthesis both pessimistically urgent and optimistic.

A genocide of technical formalities, yet the structure of this gem caught up in molecular martyrdom emerges a thing of pristine brilliance from the cyclonic carnage. Thrashing techniques attempt to erode and simplify the spherical trigonometry seemingly too complex for the average headbanger to follow. Though an act of lenience, it is mostly short-lived in comparison to the lines of complicated arithmetic propelling the smooth transitions into sedating soundscapes. The sticks holding up Visitations from Enceladus are put through a laborious process of interchanging styles to bring the listener/s the delight they seek. Those spoilt junkies, do they even understand the sacrifice of sanity made to deliver their dosage of double bass, snare and cymbal narcotics?, but like a genius on the brink of his next major discovery, no amount of pain or fatigue prevails over the will to immortalize one's self.

And like all great records, at the helm of the steering wheel there lieth some force manipulating the flow and direction of the material, a conduit if anything, committed to the safe transportation of the message being communicated. Displaying the required etiquette to give ample representation of the material through harsh and abysmal growls adds to the accreditation of Visitations from Enceladus as a persuasive and ebullient death metal record.

If there’s one thing Visitations from Enceladus has in spades, it’s ambition. Evidently, Cryptic Shift has no qualms putting all their chips on the table right off the bat, with the opening track on this album, 'Moonbelt Immolator', being a 25-minute skull-fucker that makes up well over half of the album’s runtime (perhaps a subtle nod to some 70s prog influence?). It levels several kitchen sinks worth of shit at you- layered dissonance, cosmic tapping, weird skanky thrash riffs, bass noodles flying about everywhere, with some sparse ambient moments stitched in to attempt to give things a sense of story and structure. The amorphous, Frankenstinian songwriting ends up fitting together in its own bizarre way, as if early 90s Autopsy decided to dial up the Yes influence. The jarring, disparate songwriting slowly becomes the norm, flowing just well enough that it leads you into what’s next. Each musician is constantly adding garnishes to keep your attention hooked, whether it’s an alien vocoder voice, a sudden bass lick or cymbal accent, or a guitar line that just seems to wander further and further away from itself.

It’s a bold decision, but one that makes sense given that Cryptic Shift bears aesthetic similarities to off-kilter thrash like Atheist, Vektor and Voivod, who themselves tend to take a lot of cues from their old prog rock records. Thinner, treble-heavy guitar tone is usually a bad thing, but because Cryptic Shift fills the extra space in the mix with some poppin’ bass lines (seriously, the bass playing on this album is fucking excellent and it's probably the standout instrument), the result is a sound that is balanced rather than top or bottom-heavy, making it easier to hear the delicious harmonies and guitar interplay. Overall, the production is very organic sounding, while still having the punch that a more modern sounding piece should. This isn’t an easy style to pull off, and generally it tends to be the domain of more seasoned, experienced musicians, which is why all of the founding members of this band are...in their early to mid-20s? Holy shit.

As impressive as that is, it also makes a lot of things make sense: the boundless energy and enthusiasm, the songwriting that include every feasible good idea the band can think of, and just the general youthful vision that seeps through in the grandiosity and the way-too-detailed backstory. For these reasons, Visitations from Enceladus is worth at least an investigation, but their approach does have its pitfalls. The enthusiasm that I mentioned occasionally makes the songs wander away from themselves and feel a little bit scatterbrained. While I appreciate that this style needs to be riffy and exploratory by nature, even a bit of fat trimming and more focus on coming back to a motif every now and then would have really tied things together. Now, the final tracks on this album are much steadier, with a lot more repetition and consistent themes, but there’s also a reason I’ve neglected mentioning any particular track other than 'Moonbelt Immolator' in this review - warts and all, that epic fucker is easily the strongest track on Visitations From Enceladus. While the shorter songs have their fair share of bizarre, unique thrash, it just isn’t as off-the-wall. It’s kind of like following up an orgy with missionary in the dark the next night - sure, it’s good, it would be great if you hadn’t heard it before, but since they already blew the big load early, it seems less exciting.

It’s not necessarily something that could be fixed with a simple track re-ordering - when you get down to it, the adventurous moments are a little bit too loose and freeform, and the more focused riffing bursts are too dialed into their own weirdness. With more balanced songwriting this would be an album-of-the-year level home run, because it’s got the personality, creativity and energy that a breakout band should have. Because Cryptic Shift oozes charisma, though, I’m willing to overlook a lot of the songwriting kinks, doubly so because this is a debut full-length by a young band. The time to throw all sorts of shit at the wall to see what sticks is now, and you gotta give these English boys credit for going balls to the wall in that regard. Visitations from Enceladus may not be my favorite album I’ll hear all year, but thrash nerds would benefit from checking this out, and I’ll be eagerly following how their sound develops on future releases.