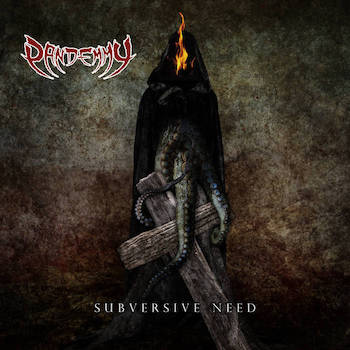 Pandemmy is a band I will never forget after writing this review. There are a couple of reasons in this amateurish sounding music, first, the mess behind everything and second, the song 'The Illusion Of Suffering' that drilled my brain and stayed forever for reasons that will be pointed out further on this review.

First, the song structures are extremely naïve, going nowhere, improvised, miscalculated and all over the place generally. There is not a single song that they don't overextend something, add a change abruptly without any reason and without flow, messy and sloppy feeling all over everything.

Writing this review made me realize how much I want for these guys to study two things in particular, as makes me sad that managing to release so much material, perseverance and hard work to end up in more crap like this. First to study musical structure urgently!!!, and second to think before composing in the concept, and intention behind each individual song and the album as a whole. The guitar solos are well done, but that's pretty much it.

This band could have a so much better sound without this turmoil approach to composition that I can't simply understand at all. Doesn't cause in me nothing more than wasting my time and wanting to listen something else instead as soon as possible (except for the solos). Each song, one after another is painful to listen and go through, tiring and repetitious, and my brain goes like crazy with all this mess, its stressful.

Production wise is below average, the guitars sound ok, the bass is buried on the mix, and the drums sound horrible, as the snare sound like a paint plastic bucket (also influences that probably the drummer is tapping them instead of playing with proper strength). The vocals are ok in their volume, but I find so awkwardly placed some clean vocals (that are nonetheless interesting) from some guys, that made me cringe instead of joining the chorus.

The third song has some Suffocation and Deicide inspiration, but not well done. The drums are just mindlessly going with the “tuca tuca” beat, that doesn't stop or varies in any way more than when the double bass comes. It's monotonous, unaesthetic and without any sense specially when blast beats come, that are extremely sloppy. The choruses are cringy, vocals dreary but much, much better than the last split with Abscendent.

The most interesting song is 'I Choose My Blood' because of its simple structure, and that doesn't mean that the song is good, because is not, but at least has some order, and can be digested somehow better than the rest.

In my opinion the second-best song here would be 'Terror Paranoia', as it sounds way more polished than the rest of the songs. Still has same problems as the rest, but much less. This is a good song, maybe the only one worth listening (together with the last one), not brilliant but good enough that made me play it again.

On the other hand, the worst of the worst would be 'The Illusion Of Suffering', believe me is not an illusion, you will suffer all what suffering means through every single moment of this crap. It’s the shortest song, with 1:40 minute long but every single second is a struggle for the listener, an actual psychological torture, that causes massive cower in me every single fraction of a second that passes through my ears, that I would never ever want to hear something like this in my life. I would rather listen 'Wrecking Ball' by Miley Cyrus on loop than this shit gladly (no joke). The vocals are the most horrible thing in this world, without being physically painful to listen, but my soul is the one actually suffering through this abstract nightmare. Especially sad is that the bluesy guitar leads are quite good, but nothing special anyways.

Finally, the last song, 'Charlottesville', has a bass solo, that took my attention, as sounded fun and I could finally realize there was a bass. This track would be the best of the bunch, but maybe a little bit long for its own good, and the recorded voice over (of a politician, probably Donald Duck) sounds pasted with chewing gum (doesn't belong). The musical investigation makes it much more interesting than the others, almost sounding like a completely different band in a good way, and this could be the direction the band should follow.

Brazil is a country that has managed to make out of themselves a really important place for metal in general. And I have faith on this band as this album also manages to sound different in some small parts, adding traditional sounds inspired from batucadas, and Brazilian drumming in general that makes me realize that there could be potential behind all this. That doesn't mean that is needed to be like Soulfly, but at least to make order and highlight and embrace those traditional influences instead of focusing so much in whatever they are doing. There are still some influences from the Gothenburg sound, but much less than before which is good.

Not Recommended, unless you want vengeance and torture somebody with the eighth track.