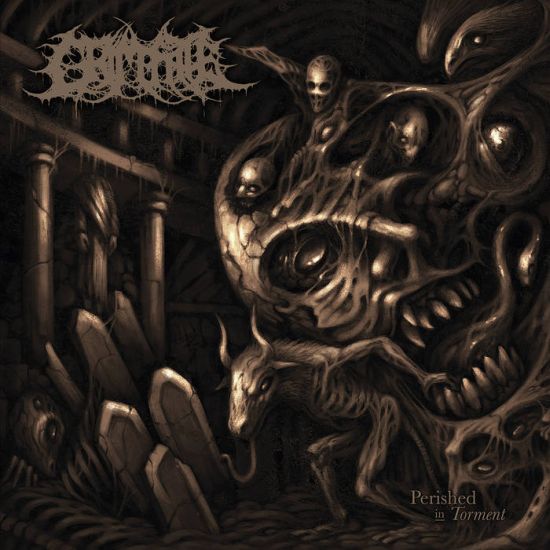 From a band with a moniker like Grim Fate you can't expect anything else than crushingly heavy doom/death metal, now can you? And indeed, it's no surprise that they do trade in doom infested death metal (or death infested doom metal, your choice how you want to put it) that sounds as morose as it sounds menacing, crushing you like a concrete elephant in the process.

The first impression I get from this cd is a mix of Cianide and Incantation but there are other bands I hear popping up as well. Divine Eve is a name I think of quite often when listening to this album, another band alternating their heavy doomed-out parts with more up-tempo sections. When the band goes slow, I can hear the spirit of Winter and early My Dying Bride but the most torpid moments of a band like Nile also come to mind and tracks like 'You Will Rot' and 'Perished in Torment' would not have sounded out of place on Cathedral's "Forest of Equilibrium". It all sounds massive but gets totally crushing in the moments that Grim Fate slow down proceedings to such a glacial crawl that they stretch into funeral doom territory. However, the band keeps boredom well out of the door by interspersing haunting melodies and the occasional savagely pummeling accelerations. These faster parts work extremely well among the nearly suffocating heaviness and keep the music flowing. Proceedings come to a close with the monolithic 'The Final Day', a 10-minute monster of a track. In its entirety it doesn't deviate from the rest of the album that much, but in the details I can hear some other influences seeping through. The name of Neurosis popped into my mind when I heard the moody melodies woven throughout the track's somber drones, adding a harrowing feel to it. Despite its length the song stays interesting and doesn't feel like some drummed up "magnum opus" vanity piece by the band but stays well within the atmosphere established by the previous tracks.

In a genre that can turn boring very easily, this is a well-crafted piece of work. Grim Fate keep it interesting with a crushing sound, good songwriting and powerful music and know how to keep monotony well out of the door. This is a release that I have on regularly and I'm still not tired of it, which is saying a lot. A recommended listen for all into death/doom!