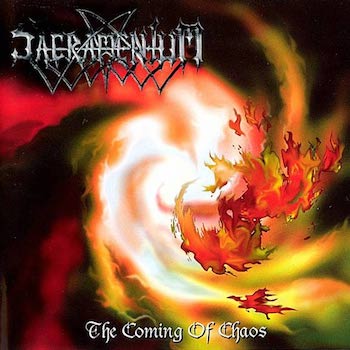 The chaos theory says that smallest changes of the initial conditions can lead to very big impacts on the whole system. It is a fact that the wing-beat of a butterfly is able to cause a hurricane. The Coming of Chaos, released by Sweden’s Sacramentum in 1997, confirms the theory, but unfortunately exactly the other way round. The entire work sounds as if slight changes during the song-writing process could have resulted in a much better full-length.

Sacramentum’s album shares the destiny of a couple of outputs of Lord Belial. On one hand, it does not appeal to the mainstream. On the other hand, it cannot really suppress its weakness for melodies that take a lot of the otherwise attainable vehemence of the material. Admittedly, from time to time the more or less melodic touch of the compositions helps them to develop a powerful yet catchy appearance. 'Portal of Blood' combines the melodic side and the general force of the Scandinavians in an exciting manner. Nevertheless, it happens too often that the band stops fighting when the battle is only half won. Murderous riffs are missing and unforced errors add insult to injury. It’s actually no big deal that 'Abyss of Time' is nothing else but a useless intermezzo. But located on the fifth of nine positions, it significantly hurts the flow of The Coming of Chaos significantly. Moreover, the title track with a playtime of more than 13 minutes is rather a waste of time than a regular song. It seems as if the band wants to teach us that the chaos has arrived. Thus, the dudes pressed it into the strangest available tones. Honestly, this sound collage just sucks and generally speaking, there are no chaotic elements in Sacramentum's sound.

The vocals are raw, of course, but they lack charisma and any kind of individuality. In addition, the material is characterised by an almost complete absence of atmospheric elements. I know this is not a pure black metal work. It connects elements of the unholy trinity thrash, death and black metal. Nonetheless, I miss a spooky, infernal, nightly or whatever aura. Sacramentum’s songs appear to me like songs of a rock band that have accidentally become too harsh. There is no outburst of energy, no true devotion to the darkest side of metal and no compositional shrewdness.

Yes, the more or less conventionally designed songs (number 1 to 4 and 6 to 8) do not suffer from major defects, but they also fail to whet the appetite for more. Especially Sweden has so many bands that are able to link the sonic form of Armageddon with the most bizarre, most monumental or most morbid melodies - Dissection, Necrophobic and so on. Sacramentum follows these legends with a considerable gap. Perhaps they did so because they had remarkable clairvoyant powers and intended to avoid the Covid 19 shit already at the end of the 20th century? Who knows? The only thing I know is that Sacramentum published an under-average work in 1997. So now it’s time for my personal interpretation of the chaos theory. It does not need more than “Mirror Black”, Necrophobic’s advance track of their new album, to listen to brilliant music again.