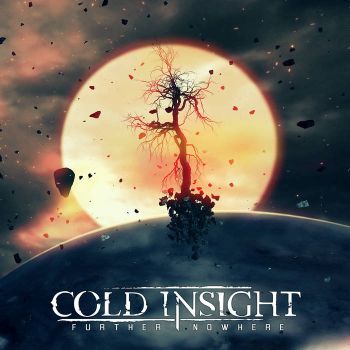 "Spacey melodic death metal" is a pretty specific niche - to my knowledge there are only three or four bands who play melodeath that can truly evoke the vastness of space and emptiness of our cosmos. As stars fill the sky with light, they can also fill the soul with wonder, and it takes a talented musician to illustrate such a raw emotion.

Sebastian Pierre is one such talented musician. Hailing from France, he has managed to imbue three separate acts with his brand of spacey synths and empyrean melodies. 2013 was a monumental point in his career, seeing two of his projects releasing finalized albums - Fractal Gates found their niche with the dark and brooding yet also catchy and soaring "Beyond the Self" while Enshine graced us with their ambient, doom-laden debut "Origin". This year also saw the first launch of his solo project Cold Insight, but Further Nowhere would not be heard in its final phase until four years later. Released in 2017, this finished product of Pierre's efforts will be the subject of today's review.

One thing immediately apparent about the album is that Sebastian had a lot of inspiration when writing it. I'm of the opinion that a truly great album requires two components. The first is an inspired, cohesive vision from the artist during the writing process, and on this front Further Nowhere succeeds. The astral wonder inherent in any mind that tries to create this kind of work can easily be observed in the ever-present ambient synths and piano melodies, normally infused in quite standard "slow-paced Insomnium" melodeath/doom tracks. It's capable but nothing groundbreaking or particularly original and without the piano and synth it'd just be forgettable, but it's nonetheless effective.

The second component is the artist's ability to convey their vision to the listener, and unfortunately it's here that I feel this album falls flat. I can see what Pierre was going for when I listen, but for the majority of the runtime I'd be lying if I said I could actually feel it. The main culprit here is the poor production - other spacey bands like Black Kalmar Skull and Atoma thrive off crystal clarity, forging monumental soundscapes as expansive as the space between galaxies that stimulates their artistry. Further Nowhere sounds flat and lifeless in comparison, weighed down by a brick wall that stops it from truly soaring amidst the stars and leaves it trapped within the stratosphere.

Another factor that takes away from the experience is the inconsistency. Had Further Nowhere been stripped of the generic, by-the-numbers melodeath tracks like 'Midnight Sun' and 'I Will Rise' and instead focused exclusively on the more atmospheric direction seen on 'Sulphur', it could have been a great album. Unfortunately it's bloated by the unnecessary content, leading to an overlong runtime which has a lot of trouble keeping the listener engaged.

To conclude, Further Nowhere isn't bad but it is very rough around the edges, especially when compared to the aforementioned Fractal Gates and Enshine albums from the same time period (both of which rank among my all-time favourite melodeath albums). I would suggest looking into either of those projects as alternatives instead if you really want to experience astral wonder; those are both akin to flying through the stars, whereas Cold Insight simply shows them to you from the Earth.