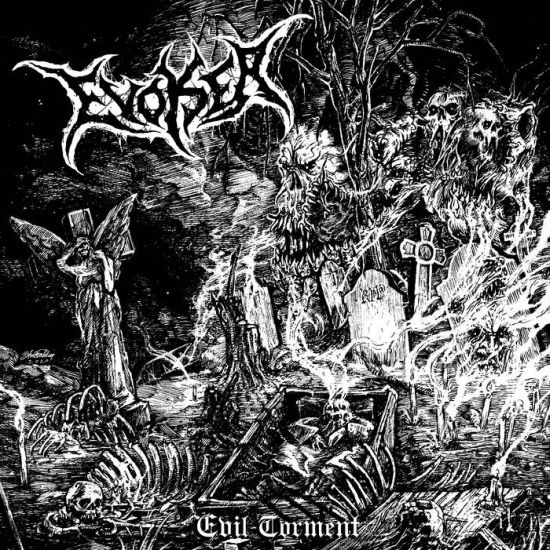 Death metal from Australia? why not?, never really been let down by the kangaroo safe haven and snake sanctuary so it’s no wonder I would latch on to this as soon as word broke of the activities. Evoker play OSDM the thrashing dark and dirty way with some black metal sauces thrown in here and there on their first EP Evil Torment.

'From the Depths' and 'Old Evil' hold steadfast to the OSDM riffing we are more than accustomed to while peacocking boiling speed and violent vocals, some doom metal at the beginning of 'From the Depths' early on in the song and later towards the end; while 'Old Evil' continues along the speeding trajectory though cutting the doom a tiny bit. However good those tracks may be even when offering nothing new to the genre, it was 'Shackled to the Grave' that won over my interest, forcing me to thoroughly consume Evil Torment. Something about that opening riff of the track that keeps me coming back; executed with the proficiency I'd expect death metal this sort to have and is supported by more finger licking leads. I think this is where the fun truly starts on Evil Torment, specifically, the listener is granted a more convincing introduction to the album, one that appears succinct musically with songs down the order.

After having found their footing on 'Exhumation of the Damned', Evoker closes the record that meets a memorable high through the guitar work on 'Parasomanic'.

After a few sessions with Evil Torment, a recurring thought happens to pinch me often in reference to Evoker's sound in terms of the genre. Because their doom metal sections are so well inserted and played, I think the music would have had a greater lasting impression had the bass been higher in the mix. However, Evoker makes up for this with their razor-sharp shredding and fiery pacing in the thrash/speed metal parts of their compositions. They emit a genuine embryonic death metal feel, but also a first wave black metal (Bathory) undercurrent could be felt adding to the diversity within the music.

Try to keep up with Evoker, they seem to be on to something.