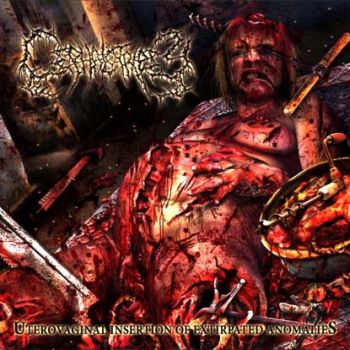 Before this album, there was pre-slam (before 2007) which is brutal death metal with slams in it, and after this album we have the modern slam (2010- onwards). Embryectomy, Dragging Entrails, Human Menu, which is pure slam and nothing else, you know what I'm talking about. I'd say that Uterovaginal... is an album that's in-between these two eras of "slam".

This album is pretty interesting and different from the crowd - it draws in brutal death metal fans that don’t really listen to slam as well as it obviously pulls in devoted slamheads too. It's just the fact that despite all the slam we got these days, this album particularly sometimes grabs the attention of people who don’t listen to or like slam much. Two different sides come together as one when it comes to this album.

Let’s start here with the music. It starts with an eerie intro that's supposed to describe the cover, which is done well, you pick up the theme from this album extremely quick. Then when the intro is over, you immediately get those slams! Perfection! SLAMS GALORE! Just as needed and expected the main factor of this album is already there, awesome. The guitar tone is great, grindy, brutal, shredding, just as it should be. Guitar parts are great. The drums are slightly triggered but it isn't that big of an issue, but it suits well with the music since its slam. The drums are like machine guns, beat-beat-beat hit-hit-hit away then a fill, with double kicking fury to back it all up. It sounds quite well with the guitar, since the guitar is just slams and simple patterns. The guitar and drums go hand in hand on this record. Both of the instruments are written and structured the same way, the drums playing a beat with double kick patterns following it, with just the right guitar parts to go along with it. The guitar and drums fit together and sound great, especially the snare rolls, ughhh......you can't go wrong with those sexy ass snare rolls... delicious!

The guitarist and main composer Nick also plays bass, but it’s not present at all. You never hear it. This is just like "And Justice For All", the bass is being played but you don't hear it at all. There are some parts where you can hear the bass, but its only slight. On track 8, 'Embryonic Gastronomy' at 1:10 you can hear the bass drop a beat for a split second, you can hear the bass line at the intro of track 3 'Consummating Omophagia', and there's another part where the bass is played by itself with all the other instruments not playing, but I forgot which track that one was. The bass is being played here but you can’t hear it at all unless the guitar stops playing.

Now here come the vocals. Good vocal performance for a slam record. These vocals are slam vox at their peak, good vocals for the purest form of slam metal. Angel Ochoa is definitely a talented and interesting vocalist. He has his trademark 'high burp' sound, which is damn easy to notice. You can listen to any band, and if Angel is doing vocals you instantly know that it's him, he has a style like no one else, believe it or not. The vocals sound the same throughout the entire album, it's not much of a problem at most times, but I thought I'd just point it out. There's a part on track 6 'Sanguinary Misogynistic Execration' at 1:13 where Angel does a somewhat deeper burp-gurgle type thing for a little, I think that sounds awesome and filthy.

The lyrics done by the guitarist Nick, and drummer Forest are very good. This is some very abstract gore. The lyrics describe what’s happening. People undergoing insane and obscene forms of surgery while getting beat and mutilated in the process, just extreme total gore happening. Angel's vocals suit the words perfectly, his vocals are disgusting and so are the lyrics. Suits each other good. These lyrics are truly what abstract means, must've took these dudes a LONG TIME to come up with lyrics these explanatory and descriptive.

Overall, this is a solid, essential, must-have album. Similar to the popularity revolving around Waking the Cadaver's "Perverse Recollections of a Necromangler", this album deals with the same thing. Just all around iconic and something new to bring to the table. When this album released it skyrocketed in the slam brutal death community - this album is a gem, most people have heard about it or seen it somewhere at least once.

If you haven't heard this, I suggest you try it. And if you dont like it - try, try again; it might grow on you someday.