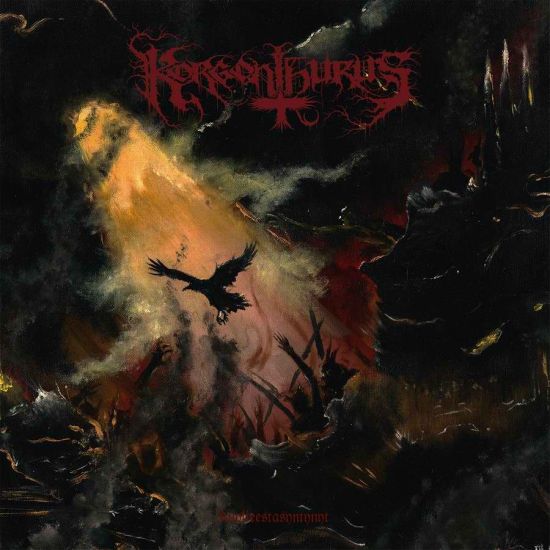 Finland needs no introduction when it comes to black metal, and from the myriad of bands that country has given the world, Korgonthurus is certainly a name to reckon.

This band is primarily known for being co-founded by Corvus, the former vocalist of Finnish black metal luminaries Horna, who also is the most recognizable since he participated in arguably that band’s best albums. But Horna is Corvus’ past; today he lends his unique blood curdling screeches to Korgonthurus. This band can be considered old; founded in 2000 by Corvus and drummer Kryth, the band has had a very rocky existence. Marred by inactivity, a rotating lineup and at least two major breakups which resulted in a two-decade old band only having three full length albums and various splits and EP releases, the band has been able to power through those tribulations and in 2020 they brought their third album which, in my humble opinion might be their finest work yet.

The thing that makes Kuolleestasyntynyt and Korgonthurus as a whole stand out is how their chosen style of black metal is unlike anything you might’ve heard before. The simplest way to describe this band’s sound is as a melting pot of a lot of sounds with the most noteworthy thing being how their music in this particular album sound and feels violent. There’s a near palpable sense of pure anger and violence in the music that is unlike any other black metal band out there and what’s more impressive is how this violence the band has in their music doesn’t sound forced or artificial. This isn’t the sound of some edgy idiot with the maturity of a 13 year old atheist, or some misanthrope who takes himself dead serious to the detriment that their music would make; it’s kind of shocking but also impressive how abrasive and violent the music on this album sounds.

It’s hard to explain how all the individual instruments and performances manage to make this album sound so aggressive and caustic as what creates this sound is the band’s work as a unit. The most noteworthy part is the guitar work of both Corvus and Insanis Xul, if anything it’s in the guitar work where the key to all this chaotic soundscape. Corvus and Insanis Xul’s guitars have a distinct sound that’s very groovy for a black metal album but without any semblance of genre crosspollination. It’s still black metal, it still has the tremolo picking and riffs and they even manage to add some of the signature somber melodies that are a trademark of Finnish black metal, but they do so in a way that enriches the overall sound of the album, making it very dynamic and without being beholden to the tropes and formulas of this particular regional style. The thing I’ve been saying over and over is how the music is so violent throughout, the overall atmosphere of this album is one of utter desperation, like a warrior lost in a dark forest who has lost everything and has nothing but a desire to kill everything and everyone in its path with utmost cruelty imaginable.

A large part of what gives this impression are the vocals of Corvus. He has always been known for his Nazgul like shrieks that are emblematic of black metal. You can appreciate it on the Horna albums he made as well as the first two Korgonthurus albums but for this particular one he seems to have reached a whole new level. His vocal work here is so intense, so unnerving and so unhinged that it might be too much to handle, especially if you aren’t familiar with the black metal. The last noteworthy aspect of course is the drumming and bass work, both handled by co-founder Kryth. Years of experience have honed his drumming skills and in here he plays with organic precision going from unswerving speed to a more controlled mid-tempo for the melodic parts where the album enters somber atmospherics, although he seems to shine more on the bass, being able to match the abrasiveness of the guitars. Overall all the members succeed and the final product speaks for itself.

With all that praise out of the way it’s worth mentioning that this album is very much a black metal album and not at all newbie friendly. In fact, given how intense and unforgiving the music is, if you’re interested in this band I highly recommend listening to their second album first (and as a warning you shouldn’t expect Korgonthurus to be anything like Horna) as it has nothing in common with Korgonthurus other than the fact that Corvus used to sing for that band. This album plays on the hardest difficulty and it will put you to the test.