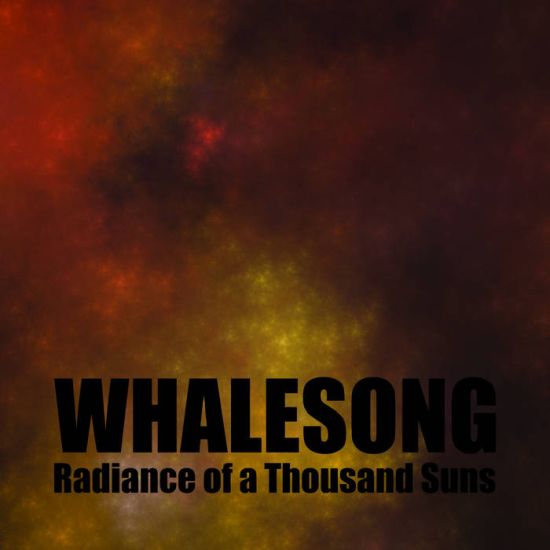 Whalesong does not go crazy publishing studio albums, but finally the band's second album has seen the light of day. Actually, more like the brightness of a thousand suns shining in the sky.

You can never have too much good industrial music, and Whalesong has already proven (whether on the debut EP Filth or on the long player Disorder) that they know how to play with such sounds. Even if in the context of the work of Michał 'Neithan' Kielbasa produces inevitable comparisons with Godflesh or Swans, it was difficult to deny the group their own vision of music. One can get the impression that Radiance of a Thousand Suns is an attempt to break away from these patches with a kind of redefinition of the current sound, and, most importantly, a quite successful attempt.

First of all, the album is not an obvious continuation of the earlier Whalesong playing style. The band is no longer trying to cause discomfort to the listener (or at least they are trying to achieve it by other means), nor are they trying to play as massively hard and dirty, as was the case in the past. The guitars will occasionally smash you into the ground, and the screaming vocals have been entirely replaced by recitations. In some respects, this is the most easily absorbed material by Whalesong, if you can say that about the album - a colossus resounding for 105 minutes, and whose title song lasts almost 48 minutes and is placed on a separate disc.

This way, instead of industrial by name (at least in the sense defined by Godflesh on "Streetcleaner" or Swans' "Cop") the label 'experimental music' is more suited to Whalesong today. You can throw almost anything into it, but fortunately the band manages to keep everything in check without giving up its industrial roots and sludge influences. Radiance of a Thousand Suns is, therefore, very coherent, although it does not overwhelm with monotony, even if a number of solutions are repeated in subsequent numbers and the looped play can last for several minutes or even the whole song. This time the composition structures are very simplified, almost mantric, and instead of noise it!'s easier to hear drones, ambient sounds, or effects like the sound of bells, irresistibly associated with bands from the Cold Meat Industry catalog.

Neithan and Grzegorz Zawadzki (who accompanied him on the drums) Whalesong is a duo focused on the climate and clear trance, in which the instruments used include gongs, vibraphone, theremin or accordion (for which Vogg from Decapitated is again responsible) and invited guests also helped them a lot. Known from Swans among others, Thor Harris perfectly enriched the album with parts of hammer dulcimer; without it the disc would lose a lot of feeling and the psychedelic saxophone of Alexander Papierz sounds great in 'Consumer' as well.

Songs such as the muted, cymbal-based 'Bliss', almost ambient 'What Does It Mean to Survive?', or the trance-like 'A Wound in the Sky' ending with a space rock punch line works particularly well here; not to mention the title song monster balancing between silence and noise, which could actually appear as a separate album. Anyway, focusing on individual songs does not make much sense, because the whole thing presents a very even level, and delving into Radiance of a Thousand Suns multiple times allows you to discover more new flavors. Formally, very simple composition frames hide a lot of them here, and it's definitely worth discovering it by yourself. I like the direction taken by Whalesong, and I wonder what will happen in the future.