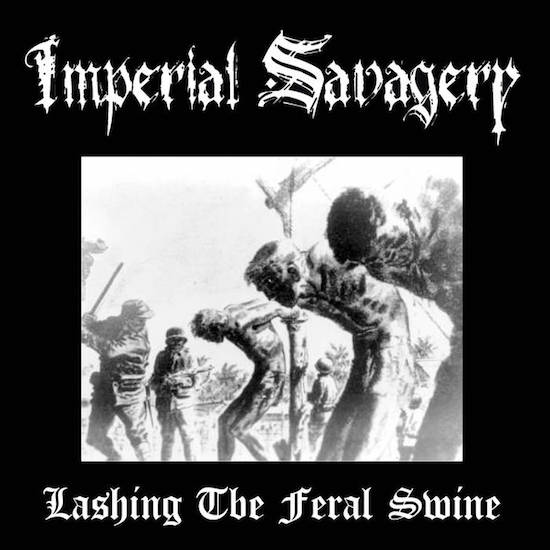 Drenched in base nepotism as I am, metal from my hometown is always a welcome and encompassing thing for two reasons: first, we here in Chicago and the surrounding areas have always had a very intense and solid scene, rife with impressive and talented bands, and second, because I truly feel Chicago gets lost in the proverbial shuffle of geographical accolades, usually caught somewhere between New York and California in a din of afterthought dismissal. We have a proud lineage, and Imperial Savagery, a band born-and-bred on the south side of the city, is another working-class cog making some severely destructive noise.

It's been a long six years since the bands battering self-titled debut, but the hiatus has done nothing to indicate that the follow-up, "Lashing the Feral Swine", has diminished the band's violent uprising against the oppressive Christian regime; actually, in short, the band's dark and dismal call to arms is one that simply entices total submission to the task.

I believe it was Glenn Danzig who once remarked, to paraphrase, that he doesn't give his friends any passes with their music; if it's good, it's good, but if it sucks, well, like it and lump it. I've always staunchly adhered to the very same philosophy; I care and covet this music far too much to pass along tripe as passable entertainment, so you can only imagine how good it makes me feel to hear something like "Lashing the Feral Swine" and feel a sense of pride that the band is not only great but people I consider longtime friends. Imperial Savagery offers nine tracks in just under 30-minutes, and what you hear is death metal on a veritable fog of dense and caustic display. This time around the production is much crisper and sharper, with every instrument viable and discernible in the mix. That said, the heavy sense of dark wonder is not subverted by any means.

The opening track, 'Churchgate Proclamation' is a proverbial banger, showing that the band has not lost a step and has found even stronger footing. Brice Dalzell's vocal howl is an ethereal chasm with which to get lost in, seemingly beckoning you to enter the infernal gates of free will. In a mire of same-old when it comes to death metal vocals, Dalzell certainly manages to incite all the right feelings of subjugation within the confines of his style that has to be heard to be appreciated. Pat Clancy (bass), Garrett Scanlan (drums) and Tom Flanagan (guitars) round out a collective that takes the evil tone perpetuated early on by Venom, early Celtic Frost, and Immolation and force-feeds it to the willing listener. Galloping through tracks like 'Vengeance Over Virtue,' 'Burned Upon Rebirth,' and 'Kiloton Crucifix Detonation,' which is one of the most definitive slabs of death I've heard in a while, proving that Flanagan is a true magistrate of some dark chords. There simply isn't a filler piece anywhere, and the tracks seem to flow so effortlessly in an almost conceptual pattern that tells a horror story passed through the ages on any given Sunday. I'm not quite sure if that "pattern" was intentional or my just hearing a line throughout, but it emitted a perfect haze of rage and warning.

If you enjoy your death metal with a hint or ten of evil, truly competent and attentive musicianship and lyrical study with which to convert, Imperial Savagery is your necessary implement. "Lashing the Feral Swine" is an organic jaunt into the bleak and enslaving world of religious oppression, offering the ready mind both enlightenment and instruction to the centuries of blind fear-mongering. There is no finer example of religious instruction this side of Jerusalem – it needs to be heard. Horror Pain Gore Death Productions did a great job signing these guys, and hopefully they get the deserved attention awaiting such brutal honesty and reverse-catechism.