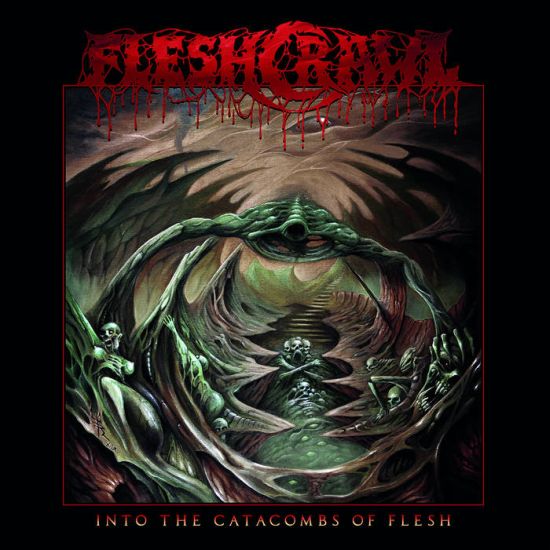 All right, veterans of death metal are out of the trenches and came back to the front line once again. Posers are advancing with emo artillery, it is time for the final bombardment of old school death from above, let's obliterate the masses of fake metal heads and force them to live like rats under the catacombs. That's right fellows, Teutonic veterans of war Fleshcrawl ended their 12-year silence with a new full length called Into The Catacombs Of Flesh.

Well, I think Fleshcrawl didn't want to reinvent their style with this release, they rather played safe and continued with pretty much the same formula they have been using for the last 5 albums. Melodic guitars (keeping evilness and not going to the extreme of melo-death), solid drums and in general a decent production and songwriting; Into the Catacombs of Flesh manages to entertain the listener; it is not a jaw dropping recording but neither it disappoints. There are some high and low parts I will develop more.

Some of the really outstanding sections of this album are the combination of fast/devastating tracks with others that tend to be more mid-paced/slow and some others that are the best of both worlds. For instance, you can find relentless tunes like 'Funeral Storm', 'Obliteration Bizarre', 'Red Streams of Sorrow' and 'Of Frozen Bloody Grounds' and these songs are characterized by their violence and speed, a real feast. On the other hand, there are some slow/mid paced songs that offer a muddier production value; give you the feeling of soldiers crawling to their trenches to avoid the stream of bullets. Examples of this type of sound are: 'Grave Monger' and 'Ossuary Rituals'. Finally, you get the best of both worlds, fast and slow dynamics in 'Among Death and Desolation' and 'Chained Impalement'.

The part I did not like that much about Into the Catacombs of Flesh was basically the track list choices the band made. I think the album in general is loyal to Fleshcrawl's sound but in this case the order in which some songs were organized ruins the flow of devastation from track to track. For instance, I really dislike the way the record started, the self-title track is not very strong and with the intro cuts a lot of energy being the first track. I would have started the record with a devastating song like 'Obliteration Bizarre', it is short and brutal just the way you want to start this death metal feast. In the middle of the album you get 3 killer songs in a row: 'Obliteration Bizarre', 'Red Streams of Sorrow' and 'Of Frozen Bloody Grounds' but they have pretty similar structures and I did not realize when one finished and the other started. A better approach would have been to place these songs in different parts not one after the other.

I highly appreciate that veteran bands like Fleshcrawl are still waving the flag of death metal with descent standards. I don't want to sound like a fan boy but I think this is the way true death metal should sound. I praise the bands that deserve it not only for the fact that they have had long careers but also for the fact that they still produce valuable music. Into The Catacombs Of Flesh was a very pleasant and entertaining listen but it could have benefit more if the track listing was organized in a more fluid manner. Fleshcrawl may have not been a very famous or mainstream band but they still kicks ass in a brutal way. As the singer proudly growls in my favorite song from the album ('Chained Impalement') "Suffer you fucking cunt, die you fucking cunt".