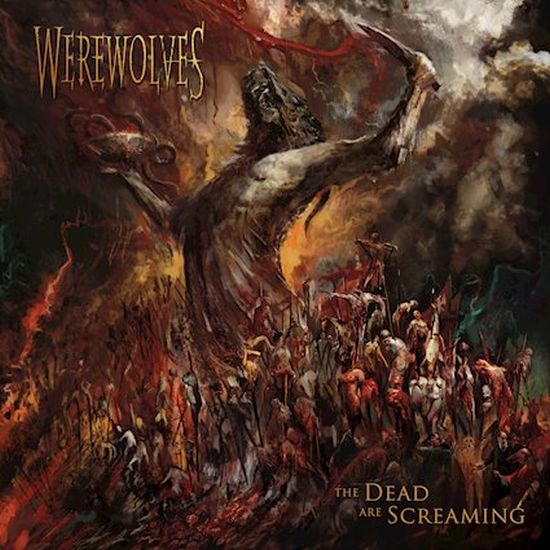 This project has an intriguing origin - it got me to check it out, anyways. The guitarist/vocalist from the Berzerker and the drummer from Psycroptic met up, apparently fed up with the strictness and professionalism of their main projects, and quickly put together a project meant to sound like slobbering cavemen trying their hand at death metal. This entire album was allegedly written and recorded in a matter of weeks, a fun little way for two well-known Australian bands to pair up, blow off some steam and bring their poise and pedigree to a more straightforward, bludgeoning version of the music they’re known to make. At the very least, it’s a good teaser for all the Berzerker diehards who are eagerly anticipating their new album.

Right away, Werewolves have some immediate differences from their parent projects that are brought about by the supergroup-type collaboration. The more organic feel that Dave Haley brings to the rhythm section means this is going to immediately lack the same sort of suffocating intensity possessed The Berzerker, while the hasty, caution-to-the-wind approach to the songwriting gives this, by intent, far less nuance and variety than you find in a Psycroptic album. The end result comes out as a simple, speedy album that relies on two to three main riffs to drive the songs, with a surprisingly melodic touch that wasn’t entirely absent from The Berzerker but seems to be more frequent on The Dead Are Screaming. 'No More Heroes', 'Gnaw Their Bones', and 'Dogknotted' all come right out of the gate with this same sort of blisteringly fast, yet unusually slick sort of riffing that would have been hard to pull off if it wasn’t being attempted by pioneers in Australian extreme music. Upon first listen, that’s what makes this sound really impressive - Werewolves immediately have a personality, sound furious and overwhelming (with a little bit of catchiness to boot) - and it doesn’t even sound like they’re trying that hard.

The latter half of that previous sentence, however, ends up being cause for concern. While the spirit of Werewolves is to do things really quickly without thinking, I do think that a little bit more time spent focusing these songs would have made The Dead Are Screaming much more potent. It’s not necessarily that I think these songs should have been more varied, far from it - if anything, I want the monstrous, hyperdrive guitars and blasting to go on more often. Whereas the better Berzerker albums hit you with speed from all sorts of different angles, Werewolves break up the manic pounding with mid-paced, bridge-building riffs that, quite frankly, don’t do shit. When this thing is hammering at anything but full force, it might as well not even be on at all, and it’s during these moments that the album sounds thrown together in a not good way. The first couple tracks up to about 'Dogknotted' hold your attention pretty well, with the slow section in that song at least rewarding you for sitting through it with a cool riff at the end, but after that the amount of filler in the tracks starts to increase and the album starts to feel like it’s pulling the same tricks over and over again. Occasionally a track is made memorable by a catchy riff or vocal line (the first and last tracks in particular have some good verses). However, with nine tracks and none being over five minutes, there’s not a lot of room for curveballs.

Maybe I’m just being too cerebral in my analysis of this album - after all, it is meant to be a meat-headed affair. That being said, the clear production and clinical precision that you’d expect out of professionals who have been playing for decades also causes The Dead Are Screaming to be too well-composed for its own good. If you really want to get that caveman part of my brain going, do some weird thumping that only kind of makes sense, not surgically tight blastbeats and fast d-beats. The way I see it, this has a couple of interesting tracks that pique my interest for the next album, but they’re either going to have to utilize the full range of their skills and make something truly unhinged and versatile, or fully surrender to the filthy caveman vibe and throw in some "Mental Funeral" type songwriting twists - maybe even "unlearn" your instruments a la Fenriz with drumming or something. Otherwise, this risks being cast aside as a slightly more accessible B-grade Berzerker offshoot, with more appeal being based on the musicians behind the product over the actual end result. The de-evolution has started a bit, sure, but I think they need more time to further regress.