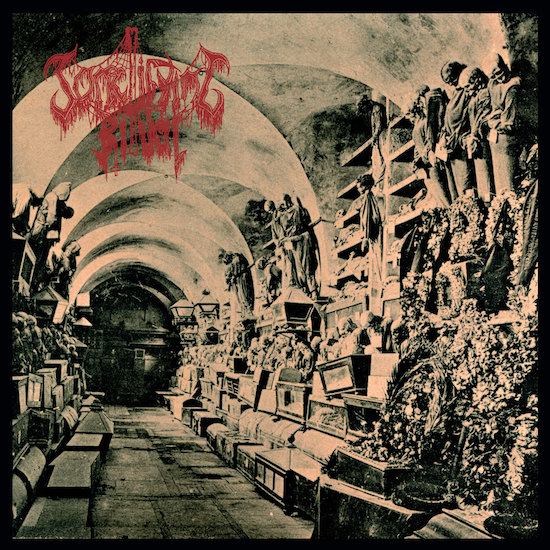 Sweet 1986, where'd you find this one Patrick? I'm having flashbacks as though I had even known about thrash/death metal at that time. A crowd of maybe 300 and a band blowing off steam on stage due to the shit it took them just to get to the venue. Yes, I'll more than love to have this one. The artwork screams perfection, the music howls at an era when thrash metal was mutating into death metal and the production makes the whole thing sound like a live recording. Bear witness to a new diabolic sect in the underground, Sanctifying Ritual, as they call upon some of the evilest forces under the mud with their self-titled debut.

This is the band's first full length album since being formed in 2008. Talk about 'highly anticipated'; this is what it means to be riding on expectations and anxiety for 11 grueling years, only to finally relieve oneself of the burden. Before this instance, two (2) demos, an EP and a compilation is all that had existed under the moniker since coming into existence and you wonder why Germany is synonymous with quality thrash metal, it takes time and dedication to make.

Comprised of 9 sepulchral, bone-snapping tracks (some of which are old curses re-applied), Sanctifying Ritual shows up to no one’s party, instead you show up to theirs and get tortured. Take no shit thrash/death metal within every breath and fiber of the band, these songs slay. The riffs sting, the vocals tear, the drumming bite, let me just say it now, Sanctifying Ritual is genuine old school thrash/death metal, and coming from Iron Bonehead, the release is stamped with the seal of certification when addressing the subject of quality.

'(Tales of the) Sinister Appearance' lunges at you like a fucking wild bear, fresh out of hibernation, triggered and sent into a maddening frenzy by the slightest whiff of blood. This one is death and thrash metal matrimony letting you know what condemnation is set to emerge from the womb. Then suddenly, an out-pour of morbid riffs and a searing disturbance from the crack of the snare, 'Into Obscure Abyss' greets the listener in the foulest of ways, showing no mercy as it switches between a blazing tempo and a doomy/sludgy throb. Sometimes queuing-in attributes of long-standing champions of the arena, while still adhering to what makes Sanctifying Ritual their own intellectual property; the band achieves glory through songs like the riff-mutilating 'Curse of Evil', paralyzing licks of 'Obsessed by Gore' and the death metal-crack-injected 'Stained With Rotten Blood'. You take those three songs alone and release them as a mini-album and you've got perhaps the best EP in the genre at the time.

The vocals sound perfectly situated between the death metal growl and thrash metal snarl, not too deep not too sharp, just the right pitch. It’s crazy how this all comes together in closing, though some of the songs such as the maiming 'Abominable Death Rebels' and 'Carved in Rotten Remains' are from the bands early catalog, nevertheless molded into a uniform and architecturally sustainable molecule of thrash and death metal. My only worry is a follow-up to Sanctifying Ritual may not be in-sight for another 11 years. I'd like to be wrong about that statement.