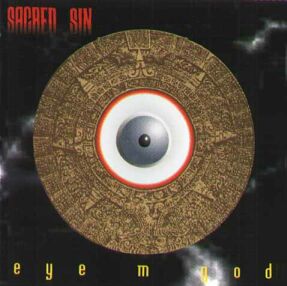 Sacred Sin offer up death metal with a technical edge, playing in the same ballpark as bands like Death and Pestilence did in the early 90's. Eye M God (I always found this a stupid title to be honest) is the band's second full length effort and I bought this around the time it was released and, frankly, I always had a difficult relationship with it. It is by no means a bad effort but it never clicked with me the same way "Human" or "Testimony Of The Ancients" did. In other words: time to go in for a deeper look!

The CD kicks off with an intro taken from the movie "Evil Dead", surely not the only ones to use it but it sets the mood for when the music kicks in. The first couple of tracks have a kind of early Morbid Angel (think "Abominations Of Desolation") vibe and they charge ahead in an agreeable manner enough. The music is varied in tempo, with moodier slow parts alternating with faster (but not blasting) parts, while playing is tight and the musical skills of the band are not to be laughed at, with riffing and leads in the spirit of the earlier works of gentlemen like Trey Azagthoth and Evil Chuck. As I stated earlier on, the music takes on more of a vibe reminiscent of Pestilence and Death as the album furthers, but upon repeated listens I also hear some thrashier influences seeping through as well. The names of Nasty Savage, Voivod and Nuclear Assault popped up in my mind here and there, even if these elements are interwoven in a very subtle manner. Even more variation is created by the use of clean female background vocals and subtle fusion influences, for instance in the interlude 'One With God' and the Dead Can Dance-esque outro of the album. All these elements make this a pretty adventurous listen and in combination with the professional production there is a lot to discover on this album.

Than why does this fail in totally grabbing me? One thing is that the compositions aren't always that great, with the band sometimes lingering too long on parts that simply aren't that interesting. Even if the playing is great and the band has a lot of good ideas up their collective sleeves, there just isn't a song on here that really hooks its claws into my brain to not let go. The music is technical without being too complex, but there's still happening so much in here that it's sometimes difficult to keep track of it all. Also has the band a keyboard player in it's ranks but his contribution goes seldom beyond that of background sounds. The keyboards were an actual part of the music of bands like Emperor and Nocturnus, but here it almost never goes further than being a backdrop for what the rest of the band is doing, which is a bit of a shame really.

If 90's technical death metal is your bag, I can surely recommend this album to you. It has great musicianship and technicality without becoming unlistenable, while still being firmly rooted in sturdy death metal. Even if there is (for my taste) an overabundance of different ideas and songs that aren't always that memorable, a fan of the aforementioned bands will find much to keep him or her entertained for quite some time. Personally, I favor a more direct approach though.