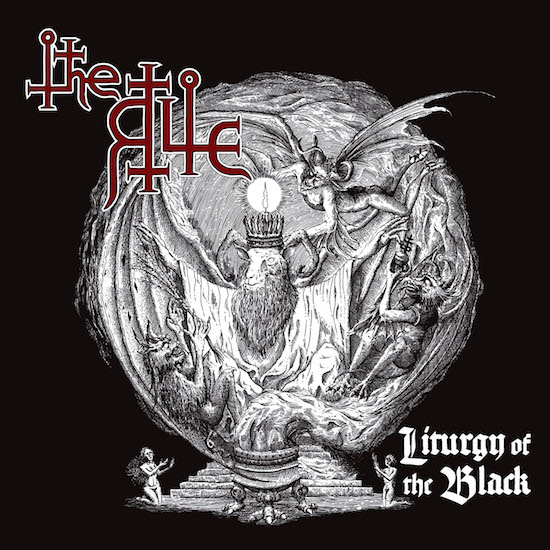 The memory of first hearing The Brocken Fires put out by The Rite has continually faded as the music heard on their debut record was not the best effort nor was it the worst. Then again that's what EPs and demos are for, to see what works and what doesn't. Where there was room for expansion is revisited and exploited on their debut album Liturgy of the Black out on Iron Bonehead Records. The training wheels are off, no longer are they testing the water or feeling their way around the territory, instead they appear more confident about how they want to handle their music and where they want to take it. The potential in which The Brocken Fires exhibited has been nurtured with great success reflected through the songwriting musical scope of The Rite's debut full-length album Liturgy of the Black.

Two tracks stood out on The Brocken Fires, the self-titled and 'A Pact With Hell' mainly due to how well they were able to play with the climax and the element of surprise respectfully. Those tracks played like the band at the peak of their finest hour though still very embryonic in its state. That being said, Liturgy of the Black relives those moments through a lengthy offering of black/doom metal from the international band. Their slow, ambient, mop-smearing style of black/doom has now been elevated to a consistent standard of what was gifted on their debut EP along with the occasional twist. Also, their music here has a campy feeling lingering around it that was not present on The Brocken Fires which could be a direct result of the intro and outro, 'The Initiation' and 'Past Lives'.

The music is still very much in the vein of their better songs on The Brocken Fires; however, Liturgy of the Black has taken many notes from death/doom metal as well as 1st wave black metal and has applied those features to strengthen and fortify it's sound.
'The Black Effigy' utilizes the element of surprise through the thrash metal beat and riffing that jump out suddenly, then in reverting to the original slow cauldron stirring pace of their doom, the keyboards appear in sinister fashion to move both atmosphere and overall song to a climaxing moment. This song sets the tone of the music excellently, given some of the band's best features reveal themselves favorably.

'Necromancy' that was originally featured on the band's demo has a tinge of traditional doom working alongside the black metal and mid-ranged power chords that while being a straight-forward track, maintains a constant movement. 'Famadihana' brings out the best thus far from The Rite. Quite reminiscent of a merge between Druid Lord and early Mayhem (Norway), it develops slowly into one of the more foreboding tunes on Liturgy of the Black. 'The Bornless One' sounds very death metal in its opening drum sequence, however it's steady crumble and resurgence with backing keyboards adds to the effect. Again, more death metal riffing shows-up on 'Echoes of Past Lives' supported by those Mayhem-like chords from "De Mysteriis Dom Sathanas". 'Sinister Minister' is their most accessible song via the melodious structure and short run time; one of the highly memorable and catchiest on Liturgy of the Black.

There are some areas that fall a bit short of their true potential but the improvement over their first entry compensates massively for the shortcomings. Hence said, I think Liturgy of the Black is a great successor that promises better from The Rite.