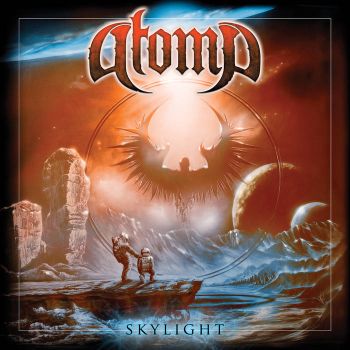 Wonder, to me, is the single most powerful emotion a human can experience. The solitude of gazing into an endless sea of stars during a cold night is incomparable to anything else - it's a grand feeling of insignificance I never thought possible to even be captured in an artistic work, much less reproduced by one. I was proven wrong last year when I was first exposed to the Swedish band Atoma's 2012 debut. Skylight effortlessly drifts between the spheres of ambient rock and post-metal, carrying the listener far beyond our lonely planet and into the astral ocean.

Saying that the whole album evokes the grandeur of space is, however, quite misleading. The first three tracks still have majestic moments, but their core focus is death. It takes you to a chaotic scene, a barren, ravaged world where bombs rain from the sky and give rise to monolithic mushroom-clouds. All-consuming, sweeping destruction is given form by low death growls in Skylight's verses while the otherworldly, soaring choruses give a sense of the enormous scale of it all. This is everywhere. It tears the sky in half, it rends the earth below, and there's no escape.

The transition point between the earthbound and celestial sides of the album comes in track 4, 'Highway', with an incredibly executed classic post-rock crescendo. The song begins in a floating, ethereal state, with wandering basslines and atmospheric drums evoking an inspiring aimlessness, the same stargazing-induced wonder as I mentioned in the introduction. Then comes the blastoff, a combination of climactic guitar melodies and a powerful, commanding vocal delivery that brings Skylight to its emotional pinnacle before the spacier, calmer side of it begins.

And speaking of the vocals, 'Highway' is just of their exceptional use throughout the album. Nowadays I usually sigh when I see a non-instrumental post- album, since it's so rare for proper singing (as opposed to spoken word or samples) to appeal to me in the genre, but Atoma throw that particular expectation out the window. Ehsan's grim, fatalistic performance carries the foreboding 'Hole in the Sky' all on its own, sharply contrasting the guitar-driven nature of most of this album (and genre) while his elegant, vulnerable singing on 'Rainmen' combines with the ambient guitar melodies and ethereal keyboards to leave a paragon of melancholy in its wake.

The components of Skylight are always coming together to form a composite whole, but the band constantly varies which is taking center stage. Many of the more overtly post-rock tracks such as 'Resonance' are fully guitar-driven, while the peaceful yet melancholic 'Solaris' sees the synths take over for a few minutes to allow you to float far away from Earth. Distant radio communications remind of the beginning of the album and of the destruction going on down there, but this time it's from a distant perspective. It's a sorrowful and reflective yet incredibly serene piece of music and one of the more overt moments of introspection on the album. While the first three tracks plunge you into the midst of the Earth's destruction and ambient masterpieces such as 'Saturn & I' fly you to the stars, 'Solaris' really just lets you stop and think. You're safe up here, far from the dying husk of a world below. But what have you left behind?

It's this kind of inclusion that makes Skylight so special. A truly amazing album has to be an experience, not just a collection of songs, and Atoma provide a golden standard for that concept. While there's no set-in-stone story, the emotions you feel while listening range from terror to wonder to the aforementioned introspection and leave more than enough room to fill in the blanks yourself. It's a spiritual journey through the stars with the exact details left up to the imagination and the emotional potency of the music is nothing short of perfection.

The only complaint I can level at Skylight is really just more praise for the album and based solely off my own experience with it - it's so unique and otherworldly that no matter how hard I try I'm never able to find anything else like it, post-rock or metal. It leaves me hungering for a certain sound, an atmosphere that to my knowledge doesn't actually exist anywhere else. My last hope is the band's follow-up Nova, which was briefly on the horizon earlier this year but has been postponed, leaving me once again patiently awaiting more news about the future of this one-of-a-kind, visionary project.

To conclude, Atoma have crafted one of the most unique, most ambitious and most well-executed albums of all time. Skylight was love at first listen and in the year since then my affection for it has only grown ever stronger with each spin. As it stands today, there's only one score I can possibly give such a masterwork.