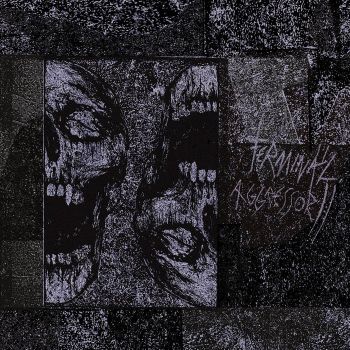 Terminal Aggressor II, the newest single by UK black metal masters Dragged Into Sunlight, is a release slathered in controversy. I'm going to attempt to avoid discussing the drama in too much detail, but I will mention that according to the band they likely won't be making any money off it, so if you wish to buy it just know that you're not supporting them by doing so.

Now, onto the music itself. The first half of the 29-minute song goes between sinister, ambient clean guitar melodies, classic Dragged Into Sunlight movie samples and harsh, abrasive noise sections. It's a great buildup, with some screams in the noise sections rivalling those on Hatred For Mankind, an album that singlehandedly made T one of my favourite black metal vocalists. At around the 15-minute mark, the last and probably most powerful noise sections quietens down, morphing into an almost industrial melody as tribal-sounding drums emerge from the background to drive the track forward. Behind the newfound rhythm begins a crushingly low guitar riff. The buildup is immaculate. And then with a tortured shriek from T, the low riff becomes a dissonant melody and Terminal Aggressor II truly begins.

The track itself is capable enough, with loud black metal sections delivering about what you'd expect from the band but never reaching quite the same levels of power or brutality as they did on Hatred For Mankind. The riffs are certainly good, and the vocals are well-delivered, but I can't escape the feeling that I've heard it all before. It's missing a key ingredient that make Dragged Into Sunlight who they are: pure, unfiltered evil. On their earlier efforts hatred and misanthropy oozed through every note and here that rawness is absent.

The second half truly shines during the slower, clean parts. Their inclusion calls back to similar sections in the beginning, which gives the track a sense of continuity and progression, two essential elements to any song as ambitious as this one in terms of length. One of its most admirable traits is that at the end of the piece you can genuinely look back and reflect on the emotions it's taken you through and the journey you've just been on. The majority of my all-time favourite songs, the ones truly worth treasuring and remembering, do this, so it's nice to see more bands reaching for that goal.

Overall, an aspiring effort from Dragged Into Sunlight has mostly paid off despite losing the evil edge that some of their earlier discography has. If I had to name one standout section, it would be the transition from noise into metal - I can't understate how perfect that two-minute buildup is to me, I love it to the point where I almost feel that the rest of the track isn't worthy of it. However, there's great unreached potential in this sound, so if this is the direction they're taking on their upcoming full-length, color me excited.