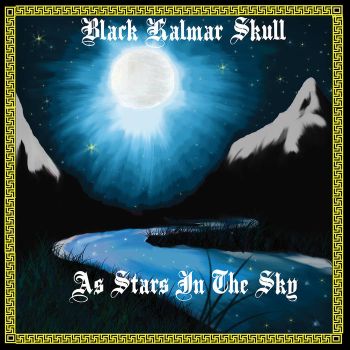 Black Kalmar Skull is a hidden gem of a one-man project which I stumbled on while randomly searching Metallum. The sound is a very well-executed combination of post-rock and melodic death metal, probably best described as a lovechild between Insomnium's metal parts and Explosions in the Sky's long, drawn out buildups and serene, introspective instrumentals. It works well. Insomnium were never strangers to peaceful instrumental sections between their intense verses and Black Kalmar Skull simply takes this concept to its next logical level (though admittedly increasing their length sacrifices some of their impact - you're not going to find anything as intense or harrowing as the interlude in 'Change of Heart' on here, but the man's trying!).

As one should expect from an Explosions-worshipping melodeath album, the core strength of As Stars in the Sky lies in its atmosphere. Acoustic and electric guitars, drums, bass and keyboards combine to take you on a celestial journey through the galaxies. The clear production matches the music well, creating a hugely expansive soundscape in which every instrument can clearly be heard and forming a unique style of ambience not often heard in the realms of melodic death. The keyboards are probably the aspect that stands out most - whether they're at the front and moving a song forward or more subtly integrated, whether they're creating a sense of melancholy ('Sadness') or wonder ('As Stars in the Sky III'), they're always doing their job effectively. They also show that they're able to craft great bass sections at some points, but unfortunately these are only present in the final two tracks. It seems strange to have an instrument that adds so much at your disposal but only properly let it shine in the last 10 minutes or so of an hour-long album.

Bass usage aside, there are a couple more questionable decisions taken on this album which need to be addressed. The instruments can sometimes feel disjointed - even though there's nothing wrong with the guitar or keyboard sections themselves, they sometimes come out of nowhere with zero buildup. This issue is especially noticeable in the first four songs, bringing us to the album's second problem: it's very slow to start, which I can unfortunately see turning off new listeners with a weak first impression, a shame considering the beauty of some of the later tracks. The first half lays the foundations and core ideas for the album well enough, but it wasn't until 'Horizons of Haze' that anything really caught my interest.

And on the topic of 'Horizons of Haze', it's one of the best songs on here. The vocals are definitely the weakest aspect of the album - the cleans never really make any kind of an impact while the growls are, to put it simply, poor, audibly imperfect in a bad way without any kind of power or emotion behind them - so this instrumental is a very welcome change of pace. The lack of structure creates a flow and sense of freedom unique to only a couple of tracks on the album. The final track of the album, 'Lost Horizons', does this as well. Although the first half contains vocals, the final few minutes are an instrumental outro in which the Explosions in the Sky influence is at its greatest. It's incredibly reminiscent of 'Your Hand in Mine' with its anachronistic feeling of finality and way of conveying the bittersweet emotion of coming to the end of a long, life-defining journey.

Overall, As Stars in the Sky is a jewel. It combines post-rock and melodeath in a way I haven't really heard before and manages to overcome certain flaws (namely the vocals) to deliver an emotional experience full of wonder and sadness. There is great variation present, particularly in the latter half - songs like 'The Long Journey' constantly change and progress while others like 'Countless Stars' introduce one idea then constantly built on for the entire song's length, creating a Harakiri for the Sky-style atmosphere of finding serenity or hope in despair and climaxing in a guitar solo which is nothing short of epic.