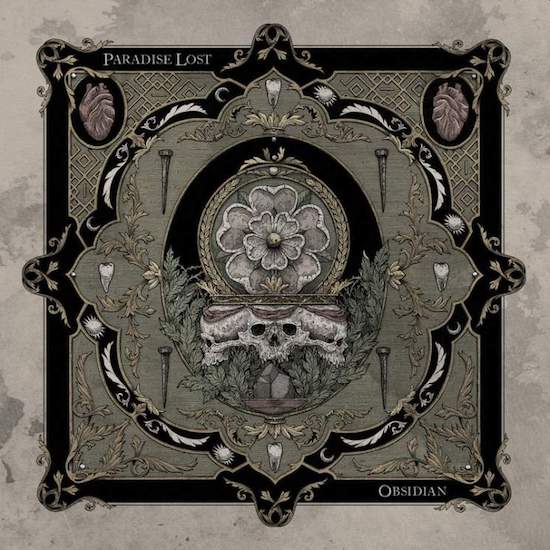 It sucks that Paradise Lost has always been a lost entity on my metal radar for, well since the existence of the band. Having heard so many great things about them and yet the reluctance to at least give any of their music a chance has always gotten the better of me. Can't say I had been anticipating Obsidian because I've little to no knowledge about the band and their history as a group and all the necessary formalities. It's only by chance I even managed to gain interest in Paradise Lost through Shaun Taylor-Steels departure from My Dying Bride which caused the band to seek out a drummer to record on the kit for "The Ghost of Orion", that being Jeff Singer (ex-Paradise Lost drummer). The more I sought-out about the matter, the more my ascending interest in Paradise Lost grew. And provided they're a Gothic/death/doom band (a favorite sub-genre of mine) and are part of that My Dying Bride, Draconian, Tristania, Katatonia family (the way I see it), I could not pass up the opportunity to hear what became of Obsidian.

Out the gate. I can tell you this, Obsidian emphasizes well on just how great of a band Paradise Lost are when it comes to capturing that gloomy Gothic feel that only few such as Draconian and My Dying Bride (among others) make no mistake of weaving into the music. Not only do they exceed at the sonic aspect, but they also manage to replicate the same feelings visually. As a companion to the first two singles released by Nuclear Blast, videos for both 'Darker Thoughts' and 'Fall From Grace' were shot and put out for all to stare at. Personally, I don't care much for visual aid/music videos to be specific when addressing metal, as they often depict poorly what most listeners (myself included) may be envisioning, but the videos produced for both tracks seemed fitting with what my first impressions were suggesting about the music. They nailed the visual aspect as far as concept and meaning and lifted my expectations for the rest of Obsidian.

Paradise Lost surely haven't lost their touch (given my brief scavenging of their catalog as of late) hence the entire thing sounds like a kickback to the 2000-2005 era of the sub-genre when hearing 'Ghost' that features a Gothic rock overtone and has a kind of deathrock/deathwave attitude as well, compliments of long standing vocalist Nick Holmes and drummer Jeff Singer. Then you'd progress to songs like 'The Devil Embraced', 'Forsaken' and 'Serenity' that'd invoke a quick realization of how seamless the transition from those up-tempo to symphonic and momentary funeral doom sections are.

The usage of more clean singing than death growls did not prove displeasing, rather refreshing, convalescent and impressive when factoring how difficult it could prove to be when shifting between harsh and clean vocals, thus, the experience of Nick Holmes as Paradise Lost frontman for 20 years beams with blinding brilliance on Obsidian. His clean singing is as good as his death growls, and it’s through this dynamic diligence in coordination and cooperation with Gregor Mackintosh (guitars and keyboards), Aaron Aedy (rhythm guitars) and Stephen Edmondson (bass), the record is able to move so uninterrupted and fluently rather than feeling coerced.

Bonus tracks are not quite an ear-catching feature I look out and listen for, however there are exceptions judging by 'Hear the Night' and 'Defiler'. These songs sound very much connected to Obsidian and even compete with the stronger tracks on the album such as 'Fall From Grace', 'Ghosts’, ’Serenity' (that has a more traditional doom metal approach) and 'Ravenghast'. 'Defile' almost steals the spotlight through its guitar solo exposé, and had it not been a bonus track, it probably would have become my favorite piece off Obsidian.

Playing catch-up with Paradise Lost has been a rewarding experience to say the least, hearing them late in their career rather than much later has its perks. Obsidian is a stroke of mastery by Paradise Lost, while traversing a new chapter in the band's history.