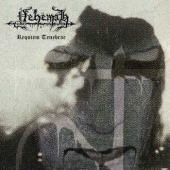 Type: Full-Length
Release Date: 2004
Label: Oaken Shield
Genre: Black
1 Creeping Chaos
2 The Great Old Ones
3 Dead but Dreaming In The Eternal Key Waste
4 The Elder Gods Awakening
5 In The Mists Of Orion's Sword
6 Taken Away By The Torn Black Shroud
7 Concience In Evil
8 Through The Dark Nebula
MetalBite on YouTube

Isn't it nice? Similar to the previous work, Requiem Tenebrae also bears its name rightly, because it was the last album that Nehёmah gave to the world, or rather handed over for 15 € per copy. Regardless of this, it should be noted that friends of stormy, icy black metal may have to overcome initial difficulties when enjoying this disc from 2005. After a genre-typical, calm and (not particularly) haunting intro, the third track also relies exclusively on atmosphere. At least, this is a piece carried by melancholy guitars and wailing background keyboards and not just a sound gimmick. I find it quite nice, but actually I appreciate black art primarily for its diabolical unbridledness. Fortunately, however, the black metal brand core is also considered on Requiem Tenebrae.

'The Great Old Ones' throws itself at the listener with the force of a ravenous predator. The drums whip the guitars before them until they almost overtake themselves in their own rampage. Singer, songwriter and mastermind Corven dishes out a can of sheer hate and his raw voice matches it quite nicely. Especially since it also sounds tortured in the slow part of the track.... No question, here are excellent seven minutes of pure stuff – recommended for imitation! And if the lyrics in the booklet would not be lost in a completely illegible scribble, surely someone would have already copied them the lyrics of this much too unknown classic for M-A. By the way, 'In The Mist Of Orion’s Sword' has a very similar configuration – and it reaches almost the high-quality level of 'The Great Old Ones'.

Overall, the French show their affection for creepy, atmospheric pieces. 'The Elder Gods Awakening' lives to a large extent from its apocalyptic density, until the end is once again raged with brute force. At the latest with this title even the uninitiated listener notices that the production does justice to all facets of the artistic work of the trio. The rough sections captivate by their cruelty, the slow ones by their density and both in equal measure by their intensity. Technical details are not identifiable in the somewhat mushy sound, but that doesn't matter at all. This is black metal, no prog rock, math core or any other high-tech nonsense. All in all, Requiem Tenebrae adorns itself with a high degree of variety. In 'Conscience In Evil' the good old Hellhammer shine through in some morbid licks, 'Through The Dark Nebula' partially relies on echoes of Limbonic Art, only in a rougher variant. Finally, the most epic song with almost 12 minutes playing time integrates a kind of chimes into the gloomy basic scenario. Since the song titles are already expressive and set the mood for the music, I can find almost nothing wrong with the album, except for the fact that it was Nehёmah's requiem.