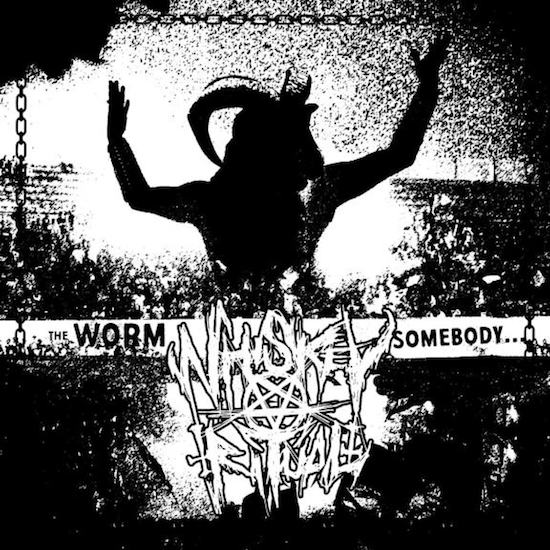 Split singles are always a nice thing in view if their two-in-one design. Here we have a liaison between two formations that like filthy anthems and boozy vibrations. Whiskey Ritual present more or less well-known sounds, because they appear once again as the dirty comrades of Turbonegro (remember their cover of 'Denim Demon' on "Black Metal Ultras"). It’s a very negro-like riffing that drives the mid-fast 'The Worm'. Catchiness is combined with mercilessly squeezing guitars, but the real earworm is the next track. You will immediately agree as soon as you know that I am talking about a cover version of 'Somebody Put Something in My Drink' from the unforgotten Ramones. You cannot improve their original tunes, that’s the dilemma for every band and Whiskey Ritual do not mark an exception. Anyway, the chorus keeps sticking in the ear in a matter of seconds, but I hope all of you know the track for many years. Just as a footnote, it was not written by DeeDee or Joey (R.I.P., dudes), but by Richie Ramone. Hail the drumming man!

Both Whiskey Ritual and Surge Assault throw their songs with a dirty, the underground adoring sound into the imaginary crowd. (By the way, measly 300 copies of the split will never generate a real crowd.) Technical nuances either fall victim to the clumpy mix or they were absent right from the beginning. Anyway, Lust and Misery was a perfect album in my eyes and from the top you can only go down. This time Surge Assualt do not reach perfection, but both tracks of (no cover version here) prolong their black thrash program. The aura is darker than that of the full-length, but maybe this is just due to the undifferentiated technical execution. The riffing, the vocals, the velocity, everything works well and shows the vital force of the underground. Seven minutes are not enough to make me totally enthusiastic about their music one more time, nevertheless, I regret that this energetic combo does not deliver more new tracks. It’s still dirty and violent fun to listen to their angry outbursts.

A final question remains: why is this vinyl-only release listed under the name Worms, Blood & Pills? The gatefold cover does not indicate this title, the Facebook side of Surge Assault also does not mention this name. However, I won’t rack my tired brain to solve this mystery. It’s better to put number 252 of 300 on the turntable and start a little headbanging session.