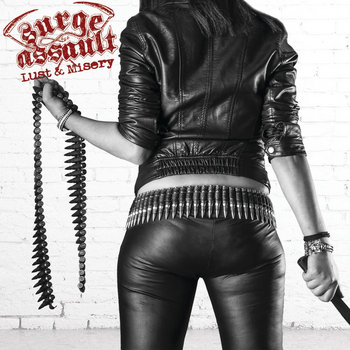 Italy was once a sunny country, but the growing number of noise making musicians is working hard to cover the land with darkness. The heirs of Necrodeath and Bulldozer try to take the land by storm, regardless whether they are called Violentor, Blindeath, Baphomet's Blood or, naturally, Surge Assault (and the list could well become an endless one). The latter have released a debut that puts a stoke in the wheel of those guys who say that black metal and thrash are no longer exciting. Those naysayers whine that these sub genres do not deliver new aspects. How tragic! Well, at the same time they are sitting in their pub, drinking their ten-thousandth beer and enjoy the fact that it tastes exactly like it has always tasted before... Yes, things are quite easy: if you like the formula itself, you like to get new stuff which is precisely based on this formula. Good news, Surge Assault know the recipe for suspenseful black thrash hammers, and they perform them with an evasive freshness.

Of course, the Italian squadron is roughly comparable with other black thrash combat units. At the end of the day, all bands of the pretty narrow-minded bastard scene are more or less comparable with each other. However, the here presented formation does not follow the most primitive approach. Already the durations of the single songs indicate that Surge Assault are not interested in stealing our time with awkward, quickly compiled compositions. Thus, the listener is never at risk to be confronted with overly simple or even insubstantial songs. The opposite is true. Surge Assault present well designed tracks without neglecting the necessary degree of spontaneity and impulsiveness. This means that the lead vocalist is not afraid of an ugly (yet totally convincing) performance and the instrumentalists are aware of the fact that high velocity ennobles each album of the sub-genre. Yet they also do not shy away from powerful mid-tempo sequences. In terms of black thrash, the six minutes of 'Whoreship Me' shape an almost epic number and exactly this tune is kicked off by mercilessly howling guitars that do not strive for high-speed. Do not get me wrong, the song has some fast-paced parts as well. Yet this mixture shows the entire force of the Italians. They do not overload the pieces with tempo changes, weird lines and breaks, but they integrate more than one riff per song. Thus, fans of formations such as Nifelheim should quickly lend an ear to Lust & Misery.

Equipped with an overwhelming dose of currishness and a strong will, the non-fickle band makes excellent use of the usual tools in order to create a homogeneous and authentic album. One can feel their juvenile enthusiasm, the lust for destruction and, to my surprise, the mature degree of their technical skills. Hence follows that the full-length offers an intensive, fanatic and sensational listening experience. Tracks like 'In Hell from Earth' are really forged in hellfire. Indeed, Surge Assault know, although they do not have much in common with these guys at all, the old title from Heathen's second album: mercy is no virtue. With this in mind, the band commutes between total destruction ('Anti Human Black Thrash') and rather occult spheres (for example, the beginning of 'Infernal Riot') while avoiding any sort of banality and triviality.

Finally, the fact that the songs are presented with a heavy, hard and surprisingly modern sound matches the approach of the band. Thus, I cannot identify any kind of serious deficiencies and I hope that Surge Assault are heading for a lasting career - whatever the word "career" may mean in terms of black thrash metal. Anyway, it is not enough to say that the band has an enormous potential. No, better still: Surge Assault attack with an absolutely perfect debut. This is the blackened Italian version of "Bonded by Blood", a mind-blowing work that would take the scene by storm in a fairer world. From the first tone of the opener to the last tone of the closer, which delivers inter alia concise gang vocals ("Hey you Satan"), everything deserves the highest applause. Italy, I am sure, will fall into darkness.