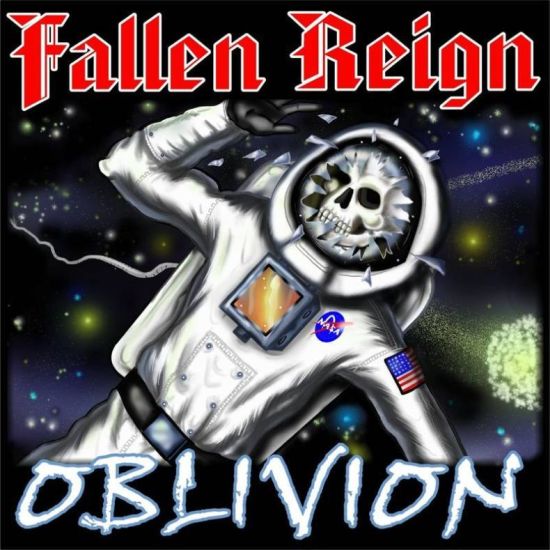 Released in 2019 digitally but found the affection of physical media through Narcoleptica Productions, Oblivion is the first true push from Fallen Reign to cement itself among some of the best releases in the genre of yesteryear and on-wards. Man, can this American trio write a tune! 8 songs proficiently put together featuring powerful vocals, tantalizing guitar leads and solos, compatible drumming and catchy hooks. From the very moment of 'The Difference' one could tell of the amount of effort put into making Oblivion a piece the band and supporters would be very proud of. And for a group just starting out, it's a reassuring thing to know they got off to a good beginning.

If you like the rocking sounds of the mid 80s, lots of organs and keyboards, well above average clean vocals and super-good riffs on every jam, then Oblivion welcomes you the searching prog/heavy power metal listener to a paradise, a utopia of serene musicianship. Fallen Reign is just one example of many underground metal acts with true potential to rise and carry on the tradition. And as a listener, when discovering something this sort, this good and competent it gives one a sense of elation.

Oblivion is an album you'd find hard in selecting a favorite or best track given all the songs possess some sort of magnetizing hook to attract and win-over any listener. The songwriting is near impeccable for such a new band; there's a sense of uninterrupted movement, an advancement with every moment every note delivered. Whether it be the soaring vocals and synth combination (that work with each other like bread and nut butter), the diverse and invigorating drumming or the riffs offering celebratory praises to the material ensuring that once you hit the road with Fallen Reign, there's no returning to where you once were.

Absolutely wowed at the level of songwriting on display here; it's remarkable the way Fallen Reign were able to make all elements work harmoniously on Oblivion. 'The Difference', 'It's Forever' and 'Fallen Reign' make it clear the conquering unit can play; then you get to songs like 'Kingdom of Fools', 'Miracle' and 'Oblivion' and you're stunned by the sheer brilliance of their compositions that leave a lasting mark in your consciousness through the sublime incorporation, flow and emotional fluorescence brought to the table.

Some songs are uplifting and powerful like album opener 'The Difference' but then a slight melancholic tone creeps in on 'I Know' adding a pessimistic all the while optimistic outlook. The vocals take advantage of the instrumentals while successfully managing to embody and project the tonality of the tunes. With those mechanics at work without error, the guitars and drums are given ample room to fill and add little interesting tweaks to the material such as on the final track 'Oblivion' that showcases a playfulness with double bass, riffing technicality with the insertion of middle eastern sitars and tribal drumming upping the journey-esque character of the music.

I admire the fact that the vocalist does not try to push his vocal registers too high at ascending moments, rather keeping it at a moderate pitch to synchronize with the melody of the songs. Rather than break it, thus said, none of the members try anything unnecessary keeping the music in check at all times. All this is made possible on a conducive production supporting the ambitions of Fallen Reign on Oblivion. Its clean, resonating and appears to be a thing of affection in connection with the music.