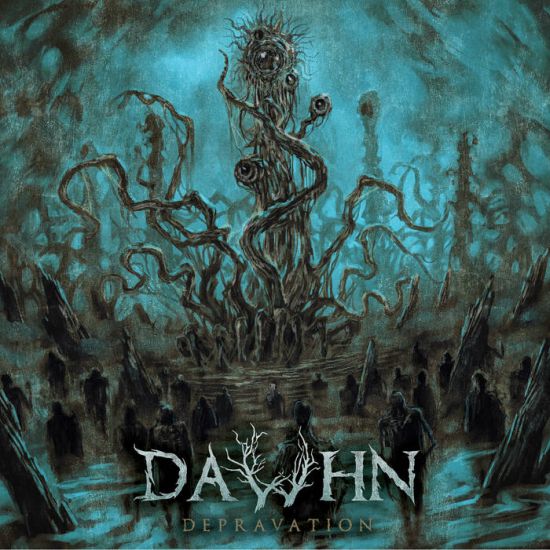 When I saw that this record being labeled as progressive death-doom, I was a bit afraid that I would be disappointed by some generic, excessively un-masculine clean vocals that are often found in prog metal nowadays, followed by a mix of random sound samples and forced melodies. Fortunately, none of this was the case.

All the tracks are pretty consistent, and there are no moments on the album that would make you think that you are wasting your seconds listening to this piece. What makes this record special to me is that it's just weird and I can't really compare it to many bands. There is just such a wide spectrum of influences that no one can explore them in their entirety, united in this one piece of music.

What stands out most is the variety of relatively strange melodies, which I wouldn't call dark or melancholic, although they are partly influenced by black metal. A more fitting description for the atmosphere would be the feeling of stepping into the unknown, which corresponds almost perfectly to the uniqueness of the music. The alternation between slow and fast guitar parts is simply amazing, the slower riffs are obviously used to create a certain atmosphere, but the fast tempos, which are rooted in death metal, are simply surprising, a good example would be the title 'III'. The faster parts give the melodies an aggressive value, almost like a multiplier effect. The great guitar work was almost completely done by Vladimir Shein and immediately catapulted him to one of the top positions in the list of underrated guitarists. There is also a magical end to the first track 'Fratility', just too beautiful not to be mentioned, which was made by Alexey Kuzhaev and immediately made it my favorite track on this album.

The drums are just another surprise factor. There are a lot of variations between the tempos on the different tracks, some beats are just slow, catchy and adapted to the melodies, while some dictate an extreme tempo for the rest of the instrumentation in the style of death metal. Since Peter Fateyev and Ilya Semyanikov are responsible for the fourth to eighth track, it's hard to say if each song had a human drummer. Nevertheless, it shouldn't matter, whoever was responsible for the drums certainly has a good ear and the quality of this release can be attributed in large part to the amazing drum sound.

The bass was not so much the focus of attention and gave the guitars room. Nevertheless, there are no "annoying" bass parts and it was generally quite well done.

Finally, for those of you who are picky about the vocals, it's hard to be disappointed by the deep growls and clean vocals on this album. Although it was done by three people at different points on the record, there is little to no difference in quality. I just have to praise the clean vocals, because they are not comparable to the relatively boring, monotonous and generally not too pleasant vocals you hear in a lot of modern metal. The sung parts give an insight into the atmosphere and form a good contrast to the harder parts in a very pleasant way.

All in all, this is more than just a simple record without any f**k ups. It is amazingly unique with an atmosphere not found elsewhere and proves once again that the possible forms of metal are inexhaustible. There are many riffs and vocal lines that simply motivate you to listen to them over and over again without losing their value. There is no guarantee that you are going to like this album because it is so strange, but the brave ones among you could be rewarded and therefore listen to this piece as soon as possible.

Labeling things is a very human thing since evolution condemned us to move from Neanderthals to Homo-sapiens and then to Homo-sapiens-sapiens; you know, ignorance is blessed. Thus, we fool ourselves to be smart and modern labeling music into subgenres and micro subgenres, like blackened this and that but at the end is just extreme music. Dawhn comes from Russia to challenge the postmodern and iconoclasts metalheads with an album that I would label as a shapeless entity. It mutates in every note just to show you their middle finger and dare you to classify their sound in a subgenre. Let's find out more.

Melodic passages are the predominant sounds Dawhn performs to all the listeners who dare to submerge their ears into this shapeless ocean full of influences. I don't really know to which degree this album is doom or death, but I do know that Dawhn transcends all those labels. Transitions are fundamental for this Russian band and that's what makes Depravation so interesting, fresh and progressive. Oh, holy molly! I said the word progressive, folks just between you and I, progressive is not a genre or subgenre; on the contrary, progressive is the way musicians play or execute their instruments. For instance, in the first track 'Frailty'; the band starts with weird effects, then moves to a more aggressive attack in guitars as well as in the vocal approach. Then, coming back to some bizarre keyboards and clean vocals. The band change gears every minute, making the experience varied and very much enjoyable. You just feel baffled by the mastery of the musicians and of course as I said before, melody is the main dish in this monstrous menu.

To continue with the feast of exquisite metal, track like 'Disciple of Death' begins with a supernova explosion in guitar and drums. This is a much more aggressive song that puts the melodies aside and focuses on devastating the listener with deep guttural vocals and sinister musical structures. Next, 'With Me' starts with a mysterious atmosphere along with some clean and melancholic vocals that contrast the previous aggressive and relentless assault. This song evokes some sad feelings but not in a negative way, it rather, makes you feel the emptiness and hopelessness of the human condition that we have to embrace instead of reject. The clean laments fit the music like a glove and make up for a very overwhelming ambience. Transitions are incredibly smooth, and the perfect example is the one from the song 'With Me' to 'Circle'; it was planned to change moods and do not disconnect you from the whole trip. 'Circle' is full of outstanding guitar melodies that let you perplex just wondering what's next in this out of body experience. Dawhn's music grows bigger and bigger; it becomes more monumental as the album transcends but always keeps the simplicity that maintains the listener very attentive and mesmerized. The record concludes with three songs that work as an inverted trilogy that goes from III to II to I. 'III' displays some ridiculously progressive drum parts that have nothing to envy in bands like Dream Theater or Opeth. The bass in the whole album is not very prominent and leave room for other instruments like guitars to shine more.

To conclude, this Russian band amazes with all the elements that they can blend together to sound like one of a kind metal outfit. I think the front cover is a very good example to describe Dawhn's musical approach. In the picture you can find a shapeless kind of monster/entity and beneath it, there are a bunch of shadows that resemble human figures. That's how I see their music, a monster that has many forms and we are just powerless and baffled as listeners, sort of empty, ready to receive dark wisdom through their music. Here we go again, Careless Records with another underground gem from Mother Russia. Hails!