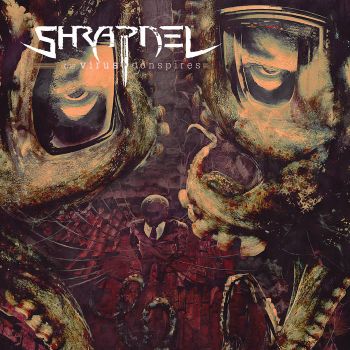 England thrashers Shrapnel already knew it in 2014 – the virus cannot be ignored. True. So, let me start with four words to the address of a currently omnipresent asshole: Corona virus, you suck! Well, the pandemic can be the worst pain in the neck, but it cannot forbid us to listen to Thrash Metal. (I apologize for capitalizing the genre. I know it is against the rules. Therefore I promise it will remain an exception, but I did not want to write this genre without big “T” and “M” as long as I have to use a big “C” for the name of the modern plague.)

Shrapnel play 100% thrash (now I am aligned with the rules again) and they do it with verve. Their pure form of thrash sounds neither blackened nor groovy. Mick J. would say it’s only rock'n'roll, but I like. Well, the first part of the statement is slightly misleading, but the second part is true. Shrapnel show the entire portfolio of classic thrash. The high velocity of the drummer motivates the guitars to jagged riffing, risky leads and howling solos. The material achieves the same degree of harshness as the Forbidden debut, but the lead vocals of Jae Hadley cannot compete with that of Russ Anderson. Hadley performs with passion, but his nagging, shouting and singing does not have an exceptional touch. He does not deliver a bad performance - he is just another thrash vocalist. However, maybe this has to be this way, because, as mentioned before, the instrumentalists also do not add ingredients of other genres. 'Pseudocommando' is one of these tracks that mirror the whole range of the material. It starts silently, holds riff-driven, Evile-like mid-paced sections with more or less flattening riffing and gives full speed after an abrupt yet adequate break. Some solo intermezzos of the guitars add fine nuances and the typical staccato thrash background vocals are not missing as well.

The artwork does not glorify violence and it is no multi-colored accident. Nevertheless, it makes not much sense and is simply ignorable. By contrast, the production leaves a much better impression. The mix lends the album a lively and energetic appearance. The Virus Conspires impresses with a professional, well-balanced and transparent sound that does not lack the quantum dirt and nastiness it needs to generate thrashing vibrations. Shrapnel have the right songs for this sonic frame. They are restless, but not overly frantic, sharp without uselessly exposed brutality and find the right balance between complexity and digestibility. It might well be that a small number of choruses, verses or instrumental parts do not fully convince, but I do not have a whole song to blame for being a flop. For example, the compact 'Braindead' does not meet highest standards, but its powerful zest for action makes it possible to forget the mediocre chorus. Another point of criticism might be that this album consists of very homogeneous songs that slightly lack autonomy. But honestly speaking, I don’t care about this accusation. I like to know the sound a band stands for.

Highlights like '22' (Onslaught-compatible riffing) or the title track (“Criminally Insane” vibes at the beginning, great mid-paced verses) show convincingly that the dudes from Norwich have studied the subgenre meticulously. Especially 'The Virus Conspires' (the song) illustrates that Shrapnel can combine wild components with pretty melodic elements. In addition, the song creates a menacing atmosphere at the end and its militaristic drum rolls lead directly into the big black nothing. These songs are relatively multi-layered, while 'Red Terror' predominantly prefers a one-dimensional speed-for-the-sake-of-speed approach. But details can be delusive – the truth is that I can recommend this album for everybody in quarantine and everywhere else. The virus conspires, but at the end of the day it will lose the deadly game. Stay healthy, metal brothers and sisters.