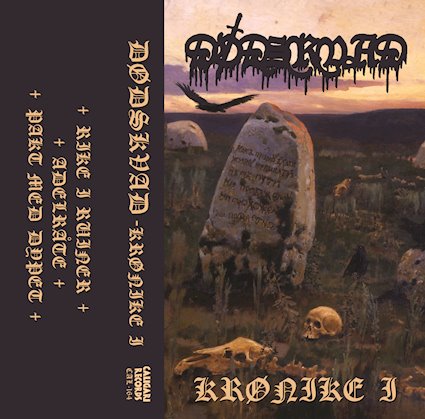 Of a big footed, grey bearded, angry yet intelligible inhabitant of some realm, Dødskvad with their debut demo Krønike I imagines a mannerly ascended fantasy driven style of death metal, heavy metal and dungeon-synth. Using only 3 songs with instrumentation reminiscent of early Bolt Thrower, Faustcoven and some other obscure metal bands I can't quite recall in addition to the familiar faces listed in the promo text, the result is one to behold in this modern age. I tell you this, it's not every day Norway delivers on something this enticing as far as extreme metal goes, but here we have a glimmering exception on Krønike I, that after one short listen, will convince and gain the attention of even the most critical within metal. Despite the bands listed as influences, Krønike I is in essence tied to none thus assuring the security of the album's and more-so Dødskvad identity.

Independently released in February digitally, the debut offering from the 3-piece collective within Dødskvad attracted Caligari Records who have set a cassette version to grace the soil of underground obscurity April 24th, 2020. Honestly, it's not a surprise something of this sort has garnered the attention and support of Caligari Records, who by the way have been slowly and carefully building a temple of jeweled obscurities and rarities since their inception. Hence, consider Dødskvad a noteworthy addition to the remarkable list of inhabitants on the label.

With only 3 short tracks, the band makes good use of their knowledge and musical skill to cook up a bubbling pot of honest synth-scarred death and heavy metal. Decorated with a flurry of fashionable guitar hooks and riffs, interesting drumming, and a vocal style somewhat reminiscent of Faustcoven, the overall feeling accompanying Krønike I is one of sincere effort to make something with lasting impact.

'Rike I Ruiner', 'Adelråte' and 'Pakt Med Dypet' give testimony of the inherently diverse and memorable compositions on Krønike I. Atop it, riding like a wig on some silver spoon societal majesty, a judgmental pointy-finger and shrugging off of peasant like dwellers is displayed through the synth additions on 'Adelråte'. Though still a death metal record, the attitude on Krønike I is telling of a rather classy and parliamentary one, thus taking the style of their music away from the (at times) common-place associations of the genre. A must own for the upstanding within the underground.