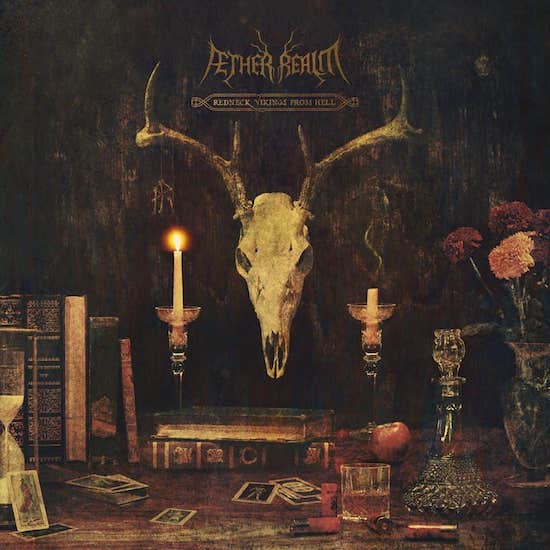 The evolution of Aether Realm has been an interesting one to follow. One Chosen by the Gods was clearly just some guys from North Carolina having fun and spinning Viking tales, while Tarot was an expansive, atmospheric masterpiece of a concept album that gripped you in its world and didn't let go until the very end. As of writing this it's actually in my top 5 most played albums of all time, so enamored am I with its masterful melodies and fantastical storytelling.

So, what exactly is Redneck Vikings from Hell? For starters, it's a step away from the grandiose and intricate Tarot, seeing a conscious effort to condense the band's signature sound and offering up much more concentrated, fast tracks "Bangers" if you will. Unfortunately, this does lose a lot of the emotional value - nothing on here hits anywhere near as hard as the 19-minute epic 'The Sun, the Moon, the Star', which gradually builds up in intensity until it reaches a beautiful climax 15 minutes in. By limiting the length of their songs Aether Realm are effectively cordoning themselves off from the ambitious and challenging side of their sound, and personally I can't say I'm a huge fan of that decision. Tarot struck a balance between the epics and the fast-paced bangers, and Redneck Vikings tips that too far to one side.

However, that's not to say the bangers aren't good. 'She's Back' is so much pure goddamn fun I couldn't stop myself from grinning like an idiot for its entire duration the first time I heard it. It's Aether Realm firing on all cylinders with epic orchestrations supporting fun guitar melodies and a driving, breakneck speed drumbeat, and not a second of the concise runtime is wasted. It's also untrue to say there's no emotion present on the album - though the more potent melancholy the band have previously shown on cuts like 'Strength and The Fool' has taken a backseat, the pure rage that was previously confined to 'The Emperor' has been given a full 4 and a half minutes to fester and lash out in the form of 'Slave to the Riff'. Here low, chugging riffs combine with some of the rawest, pissed off vocals I've ever heard out of Jake, but even still they manage to fit in a few playful, fun guitar lines, solos and even a narrated segment. It's a fairly grounded song about the negative side of creating art, the side that makes you want to rip the canvas apart and smash your instrument, but it retains the signature fantastical theming which gives Aether Realm their identity. That's what's so important and what makes 'Slave to the Riff' the best balance of theming and artistic expression on the album.

One of the things that personally bothers me about this album is that lyrics that take themselves seriously rarely seem to coincide with truly great composition. 'One Hollow Word', for example, is lyrically the most well-written and emotional song on the album but the execution is less than perfect, with a somewhat messy transition into a chorus that just seems slightly out of place, as if it's a mismatched piece from a subtly different puzzle. The other side of the coin is songs like 'TMHC', which has some of the catchiest and most memorable melodies on the whole of Redneck Vikings but just so happens to be coupled with lyrics that sound like they're from a nu-metal record. Sure, you can make the defense that the band aren't exactly taking it seriously, but it does nonetheless break immersion and for me that's a problem. Even 'King of Cups' at least remained in line with the concept of Tarot. That served a huge role in making the album such a cohesive listen even with what was ultimately a silly drinking song shoved into the middle, and Redneck Vikings feels a little disjointed at times in comparison.

As illustrated above, there has always been a split between the serious and silly sides of the band - compare Swampwitch to One Chosen by the Gods or the aforementioned 'King of Cups' to 'The Sun, the Moon, the Stars' - but here that's been dialed up to 11. The decision to include a spoken segment in which a man with a very exaggerated American accent asks you if you have what it takes to be a real Redneck Viking is... well, questionable is a light way of putting it. Once again, for me personally this is just a step too far into the absurd and as charming as it is to hear how much fun the band are having putting the album together, the music's suffering for it.

To conclude, Redneck Vikings from Hell is an album of extremes. You've got some of Aether Realm's most brilliantly executed peaks and you've got some of their worst flops (with an intense stare at the title track). Is it worth listening to overall? My answer is yes. While it doesn't quite live up to the first two records compositionally, it's hard to fault the band for trying out a sound they can completely call theirs and moving away from their previous very-obviously-Wintersun-inspired territory. This release is unique if nothing else, and despite being plagued by a few misses it importantly shows growth. That being said, Tarot was an incredibly slow burner as far as melodeath goes (and I did already bump the score of Redneck Vikings up with repeated listens), so who knows? Maybe in a few months I'll be rewriting this review with a 95% and cursing my past self for his awful opinions.

Highlights: 'She's Back', 'Craft and the Creator', 'Slave to the Riff', 'Hunger'

When backtracking through the history of a musical subgenre, looking at localized scenes will provide the best anchor point to study its emergence. Some of these scenes have garnered mainstream recognition, such as the Big Four from Bay Area thrash metal sound, the second wave of Norwegian black metal, the Swedish death metal trio and of course, the new wave of British heavy metal. A lesser known but influential scene became prominent in Finland in the early 2000s and was led by Children of Bodom. Bands the likes of Insomnium, Kalmah, Wintersun and Mors Principium Est all played a very distinctive style of melodic death metal. One of the most prominent features of the sound was the heavy emphasis on melodic riffing through the lead guitars. This Finnish sound travelled far and wide during the 2010s and shaped the identity of many bands, Aether Realm from the United States being one of these.

Aether Realm, hailing from North Carolina, is one of the relatively newcomers in the genre as it has self-produced two albums before being noticed by the juggernaut of Napalm Records. Having access to more resources clearly helped the band as the production is clearer and the mixing complements the band’s various features which now make them distinguishable from the Finnish sound. In fact, for most of their musical career, Aether Realm was known as a Wintersun/Kalmah worship band as their first album sounded exactly like what you would expect from these Finnish melodic death metal bands. Their second album, Tarot, was widely acclaimed and was a clear improvement on their sound and song structure but was still regarded as an album to listen to while waiting for the next (real) Wintersun album. This time, their third full length album, Redneck Vikings from Hell Aether Realm expanded beyond their Finnish influences and managed to capture their own sound.

The first song, named after the album, is the best mix of bluegrass and melodic death metal I have heard. The banjo makes it feel like you are listening to a Dixie version of Ensiferum. While the song by itself is quite refreshing, using this sound to produce a complete album would have certainly make the music feel gimmicky. Aether Realm were acutely aware of this as the next three songs, 'Goodbye', 'Lean into the Wind' and 'Hunger' go back to that familiar Finnish sound. The song structure and clean vocals from frontman Jake are both elements that make this album shine in a new light and differentiating them from their Finnish counterparts much easier. This new vocal style is most effective and impactful in slower songs, such as 'Cycle', where the lyrical themes are much more personal. This is especially the case on their fourth song 'Guardians' where Jake’s vocals convey both the emotion and power necessary to produce a well-balanced power ballad. A certain technical prowess is required for a metal artist to create a power ballad in 2020 and to not make it feel forced or cringy. So, for that Aether Realm does deserve credit for pushing their boundaries.

The second half of the album kicks out with 'One Hollow Word' and 'She’s Back' which both follow the approach used earlier in the album. Influences from the American metalcore scene can be heard in 'Slave to the Riff' which is an interesting experiment but doesn’t appear to blend quite well with the sound they are trying to achieve. 'TMHC' is as close to a Children of Bodom song we’ll ever get as even the song title has parallels to the band. The album ends with an 11-minute outro which does feel a bit out of place and stretched out.

Aether Realm managed to outdo themselves on this new record. By introducing very familiar riffs, adapting them to a unique song structure and innovating with their vocals they managed to keep the style ever so relevant and interesting. The addition of slower and more introspective songs in the mix shows the willingness of the band to experiment further and push the boundaries of the genre. I would recommend the album to anybody interested in the melodic death metal scene.