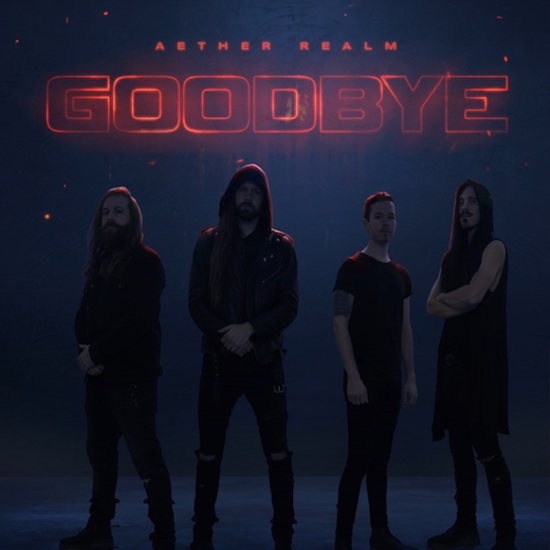 After a competent-but-not-too-special debut album, Aether Realm really found their footing and put themselves on the map with their 2017 release Tarot, where a Wintersun-esque approach to their genre and folk overtones came together to take the melodeath community by storm. 2020 will soon see the release of their third album Redneck Vikings from Hell and the first single is now out.

I'll cut to the chase. 'Goodbye' is completely out of the left field for this band. Parting with the fantasy and folky elements of their two past albums almost completely and instead taking a much more squeaky-clean, modern approach to their genre. Whether it's necessarily better or worse is up to each individual listener to decide but if you go in expecting another Tarot you're setting yourself up for disappointment.

One aspect of their sound which has thankfully been kept is the smooth interspersion of harsh and clean vocals; Aether Realm have always had a special way of doing it and make the changes between them feel completely natural. Their integration is never too structured; to the point where it feels forced (as much as I love the song, I usually point to the first half of Insomnium's 'While We Sleep' as the most egregious example of this melodeath pitfall). They always seem to just go for whatever works best in the given situation and I'm pleased to report that this still is the case here and that it looks like the band are still going to be finding creative ways to combine different vocal styles in their music.

As for the instruments, taken on their own they're all capable enough. The guitarwork and keyboards are both catchy and fun, but there's one key thing missing: atmosphere. Tarot was home to grandiose soundscapes, a score worthy of an epic journey across frosted fields and into mysterious forests. 'Goodbye' operates on a much smaller scale, being an energetic track about the struggles of songwriting, which leaves it feeling quite underwhelming in comparison.

The one department that does undeniably see a huge drop in quality is the lyrics. I find it quite hard to stomach the transition from:

'"Long have been complacent with the hand I've been dealt
Restless and weak, from the life I've built
So I'll journey afar, for there's glory to find
And I'll fill out my entry in the annals of time

Bid my farewell to the ones I love
Their grief but a fleeting feeling
For nature is calling, my heart compelled
Every branch, every leaf, has a story to tell"

"You give me bad bad dreams and they just ain’t quittin'
And I’ve been reading the signs
I wrote a melody and I just can’t hit it
Feels like I’m livin’ a lie
And when I lay my head beside you
It’s not my kinda life
So goodbye, goodbye, goodbye"

Lyrics like this tie into 'Goodbye's poppier sensibilities, which for me is a pretty big negative. I'd be much more willing to give this song a high score if it wasn't for a chorus that tries way too hard to be anthemic and tailor itself towards mainstream appeal. It's not like Aether Realm weren't already pretty accessible to begin with, but in my opinion songs like 'Death' executed the 'simple verse/catchy chorus/epic solo' structure much better by retaining a clear, memorable theme and a focused atmosphere to match throughout.

With all that being said, 'Goodbye' does grow on you. After repeated listens the excellent guitarwork beneath the somewhat lackluster composition begins to stick out more, and with two amazingly crafted solos ending the piece off it's hard to argue that the track doesn't have a lot of charm to it. Aether Realm have made a daring move, especially after the amount of love Tarot received, and it's left me very intrigued to hear the rest of the album.