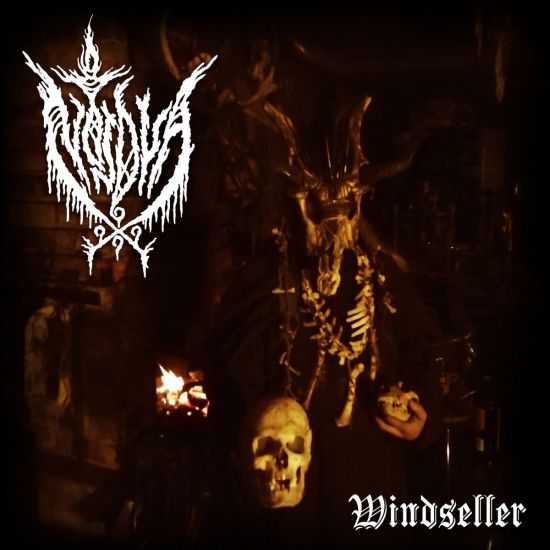 I was not expecting much from newly formed Nôidva at first glance, but reading just enough about them and better yet, coming to find that they hail from the quality black metal capital, Finland, gave me a change of heart judging by the region's track record for consistency in the sub-genre. I've heard their debut Windseller enough to tell you that the music on the record hits like a powerful gust of frostbitten breeze. The 6 songs you'll get on the album are without doubt some of the best black metal you'll hear from a newly formed unit plying the format and you get that traditional Finnish sound affiliated with so many great bands from the nation.

The first encounter had with Windseller, one could say that something appeared to be shorting. I couldn't quite pin-point or identify what it was at the beginning, but with enough repeated listens it would be revealed. It's not a deal-breaker of any sort but the vocals could be a bit better, those mid-ranged snarls/screams are not the most convincing but at the same time I get the feeling they were intentionally done that way as to be an integral addition to the music rather than dominate the music. Either-way they don't hurt the songs given the instrumentation is significantly strong, thus posing as a compelling enough feature of Windseller.

In addressing the music itself, you could say that the entire thing plays like one hypnotizing serenade to a cold winter night. Opening with a mid-paced heavy metal attitude, title track 'Windseller' sets off with much conviction and a serious emphasis on memorable song structures. Melodious riffing, soothing keyboard synth and agile drumming form the building-blocks of Windseller that would be expanded upon as time progressed on the record. 'Followers of the North Star' shared the same sentiments as the opening track; however, scaled back on a minor degree in the usage of keyboards and acoustic guitars, in turn focusing more on a more pagan-esque though somewhat Immortal ("At the Heart of Winter") influenced form of second wave black metal especially with the usage of those high mid-ranged power chords.

Though having a very strong side A, Windseller would go on to offer its moment of glory on the B side via 'Into Polar Nights' and 'Eclipsed by Goathi's Blood', both of which deliver the best compositions on the album through their indicative Goatmoon acknowledgements. The music on these songs arrive at a true potential or perhaps what Nôidva had been aiming for from the onset; a collective multi tonality.

Hopefully Windseller could be followed up and surpassed in the future by Nôidva, provided the will and means to do so remains intact. Having been acquired by Purity Through Fire, I trust all will be well. Windseller is a riff and keyboard bonanza, a chilling though mellifluent session of black metal.