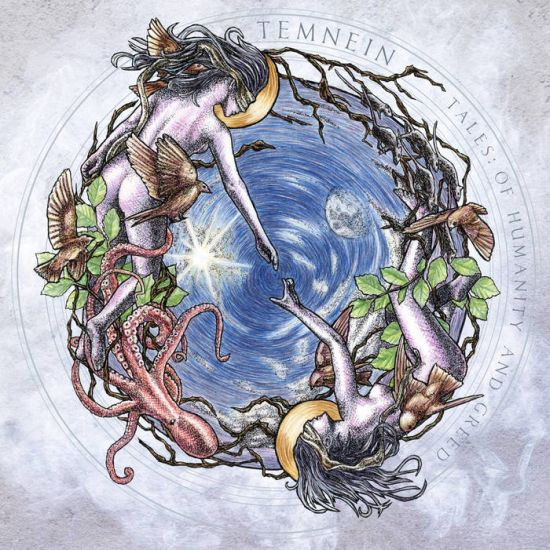 Buy on: Bandcamp
Type: Full-Length
Release Date: May 22nd, 2020
Label: Independent
Genre: Death, Melodic, Progressive
1 The Storyteller
2 The Blind And The Greedy
3 The Knotted Bag
4 I Am Davy Jones
5 Rise Of The Sontarans
6 A Few Drops Of Blood
7 City Of Gold
8 Dirge For Termina
9 Yuki Onna
10 Scums Of Hamelin
MetalBite on YouTube

It's pretty tricky, I gotta say. Although the technical skills of this charming French band are certainly on an almost high level to promise some kind of commercial success, they have made the tragic mistake of not making the music primitive enough.

The melodic and progressive elements incorporated into the music are the dominant feature of this whole piece; you may find this boring in the case of the first exposure, but I assure you that it is definitely worthwhile to let the music creep into your head a little.

A certainly remarkable feature of this album is that it is not repetitive at all; a more than decent number of ideas have been implemented and gave each piece its characteristic sound and atmosphere. Moreover, despite the fact that there is a great melodic variety, the album has a quite good harmonic quality overall, and figuratively speaking, if you let the music speak for itself, you would realize what it has to say. The riffs themselves are not overly complex, but the song structures are definitely an allusion to guitarists' progressive tendencies, which are slightly overshadowed by the strong emphasis on melodic aspects. Both guitarists have done an incredible job in terms of riff and songwriting. The presented shredding is incredibly effective, while the melodies and the degree of complexity fit perfectly to the overall concept of the band, and every riff seems to be adapted to the lyrical content growled out by Jocelyn Fidry, whose voice gave so much of the needed intensity and aggression to this album. His cries are simply harsh, but the words still remain very distinctive.

Another unsung hero of this work of art is Valentin Treuillier; to be honest, I was definitely not impressed by his drumming style at first, but if you put it in the context of the guitars and the prevailing calm atmosphere, his decision to keep the beast inside is quite reasonable. The atmosphere doesn't radiate aggressiveness, except for the vocals, which are a nice contrast, and Valentin's relatively chilled drumming style seems to pay more attention to the overall precision and coordination with the riffs, making his work so outstanding. He is also very capable of playing decent blast beats when necessary, but these are reserved for special occasions like the ones of the track 'Suffering Silence'. His complexity and precision in the way he plays the drums is very similar to Adrian Erlandsson's approach, and if you are a fan of At the Gates you will surely be entertained.

It's almost a perfect release, but there are problems. The achieved technicalities and the effective use of melodies accompanied by complex song structures come at the cost of aggressiveness and speed, which isn't necessarily boring, but also not overly exciting. Therefore, the whole album can be called a low-energy release, which simply means that despite the beautiful lyrics that throw us back to reality and the melodies, the music doesn't ultimately cause many sudden rises in our adrenaline levels (it still has a decent emotional impact).

Well, is the release perfect? Almost, but the lack of speed is unforgivable. The ideas were worked out quite decently, but Temnein didn't take the final step and refined this record to absolute heights. And now to the question if you should get it? In any case, it's simply a release that's a lot of fun, with just too many moments meant not to be missed, even though it lacks a few BPM. Should you go to their shows? Do it, the guitars alone are worth it.